You won’t believe what Roman Kemp and Adele Roberts were served up on I’m A Celebrity! 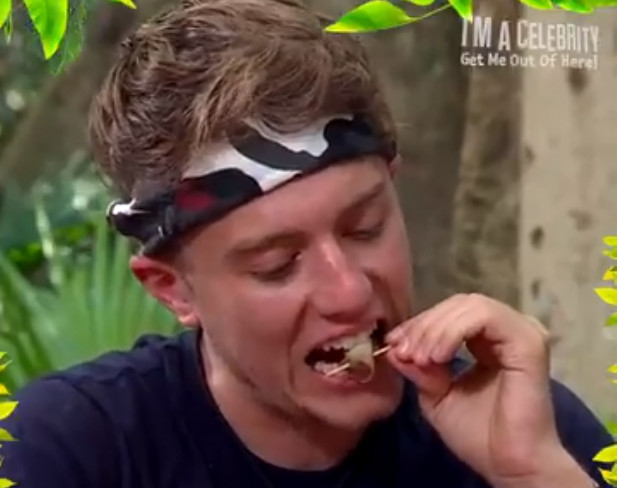 Roman Kemp and Adele Roberts got their just desserts on I’m A Celebrity last night when they took part in their first bush tucker trial.

The pair had both been nominated by the public to do the trial called Just Desserts, which involved eating all sorts of nasty things.

It seems Roman’s dad Martin voted for his son’s nomination as he tweeted: “Just voted for my boy to eat kangaroo bo***cks..That’ll show him!!”

Just voted for my boy to eat Kangaroo Bollocks ..
That’ll show him!! @romankemp

There were ten disgusting dishes with Roman and Adele each having to eat five, to win ten meals for the camp.

They chomped their way through such delicacies as vomit fruit, duck’s testicles, a cow’s udder and pig’s uterus, but the final two dishes were the crème de la crème.

In fact, Adele’s final dish was called crème poola, made from camel’s anus. She described it as a party ring and managed to down it after much grimacing.

Last for Roman was cocky road ice cream made from a penis. As the dish was uncovered, Adele quipped: “That’s a big one!”

Ant said: “It’s a penis, but can you tell which one it comes from?” Roman caused laughter, referring to fellow camp mate James, by answering: “James Haskell,” but then guessed correctly that it was a bull.

As he tucked into it, Adele encouraged him by telling him to “keep grinding it” but Roman was having trouble swallowing. He spluttered: “I can’t swallow it.” Then, with a little more chewing it was gone!

Between them, Roman and Adele managed to get 10 out of 10 stars, so a meal for all of their camp mates. As they left to return to camp to tell the others, Adele said to Roman: “Lovely date Roman, thanks very much I enjoyed it!”