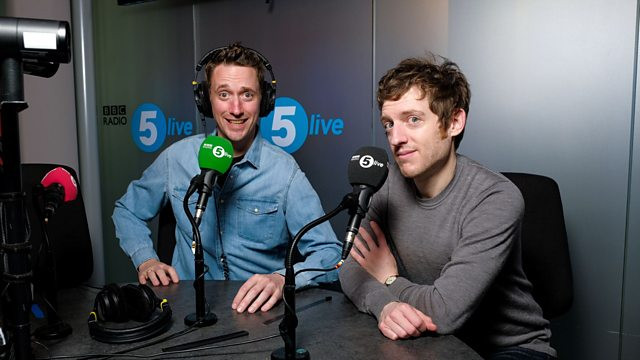 Elis James and John Robins are joining BBC Radio 5 Live. The internationally renowned comedians, who have been presenting together on commercial station Radio X since 2014, will host a new weekly entertainment show on 5 Live, beginning on Friday 31st May.

Elis and John have been mates since meeting on the comedy circuit in 2005 and have won a Chortle Award and a British Podcast Award for their Radio X show.

Elis is a regular on 5 Live’s Fighting Talk and was absolutely robbed by Richard Osman in the 2017 Champion of Champions final. He also presents the Feast of Football podcast for BBC Radio Wales and has had roles in numerous sitcoms, such as BBC Three’s Josh. John has appeared on Live at the Apollo and Mock the Week and he won the prestigious Edinburgh Comedy Award (formerly the Perrier Award) in 2017 for his show The Darkness of Robins.

The pair recently released a book called The Holy Vible that saw them sell out venues up and down the country with an accompanying live show.

They are best friends who are complete opposites. John is a fanatic of the band Queen and supported them at their 2014/2015 New Year concert; Elis lives for Swansea City Football Club and is a proud collector of retro football shirts.

The duo will present a new two-hour show from 1pm-3pm every Friday to help kick-start the weekend with a mix of comedy, fun features, guests and callers. The show will also be released as podcast on BBC Sounds.

In addition, Elis and John will present a separate weekly podcast which launches later in the summer.

Elis James said: “I can’t wait to get started with John. I’ve been a 5 Live listener for 20 years and it’s thrilling to think I’ll be working in a place where water-cooler chats about Mark Hughes’ playing career at Bayern Munich are actively encouraged rather than frowned upon.”

John Robins added: “For too long the BBC has displayed anti-Queen bias. I, OFCOM and two Parliamentary Select committees feel this has gone unchecked for too long. Due to the unique way the BBC is funded, it’s only right licence fee-payers (who, let’s remember, were responsible for making Queen’s Greatest Hits the UK’s best-selling album of all time) receive a balanced approach to all matters Mercury, May, Taylor and/or Deacon. I’m delighted to be given this platform with Elis James, Friday 1-3pm, and I’m also excited about our separate podcast where we will tackle other issues and there will be slightly less Queen.”

Jonathan Wall, controller of BBC Radio 5 Live, said: “Elis and John are one of the most talented pairings in radio and will bring a new audience for 5 Live. It’s a real coup they are joining us for their first BBC Radio show. They will bring a new sound and direction to Friday afternoons and add to an already really strong line-up that includes Adrian Chiles, Kermode and Mayo, Anna Foster and Tony Livesey. Elis and John fans will hear more of them than ever before with both a live show and two podcasts. They are a fantastic addition to the 5 Live family, and I can’t wait for them to get started.”

The new show from Elis James and John Robins will air on BBC Radio 5 Live on Fridays between 1pm and 3pm from 31st May. Following this, Kermode and Mayo’s Film Review runs from 3pm to 5pm and, from 31st May, 5 Live Drive begins at 5pm on Fridays.

Elis James and John Robins are joining 5 Live!@nomadicrevery and @elisjames will present an entertainment show (also released as a podcast). In summer, they will launch an additional podcast.