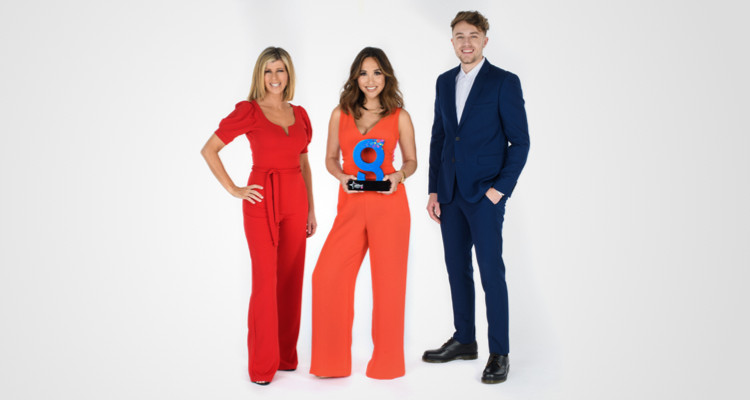 Capital Breakfast’s Roman Kemp and Classic FM and Smooth presenter Myleene Klass will return to host The Global Awards 2020, with Smooth’s Kate Garraway also joining the hosting line up for the first time.

The ceremony, which celebrates the biggest stars of music, news and entertainment, takes place at London’s Eventim Apollo Hammersmith on Thursday 5 March. Artists performing on the night include Camila Cabello, Ellie Goulding, Tones and I, Aitch, Stereophonics, Russell Watson and Aled Jones.

Award winners are picked by the public and a panel of industry experts from categories across a wide range of genres.

Speaking about hosting The Global Awards with Very.co.uk for the first time, Smooth’s Kate Garraway, said: “Following the massive success of The Global Awards over the past two years, it is such an honour for me to join the fabulous Myleene Klass and Roman Kemp to co-present this year’s ceremony.

“What makes The Global Awards so unique is that we’re celebrating the stars of music, news and entertainment across the night – and with performances from artists such as Ellie Goulding, Stereophonics, Aled Jones and Russell Watson, it promises to be a very special evening!”

Capital Breakfast’s Roman Kemp said: “The Global Awards with Very.co.uk is such a special evening and I’m honoured to be joining Kate and Myleene to host this incredible show. I can’t think of any other awards ceremony that celebrates such an incredible breadth of talent across so many genres – it always makes for some pretty amazing moments on the night and I can’t wait.”

Smooth and Classic FM presenter, Myleene Klass said: “I am over the moon to be hosting The Global Awards for another year. It’s so rare to have an awards ceremony these days which celebrates all genres of music the way The Global Awards do. There’s genuinely something for everyone, from pop through to classical, just like all the stations Global represents. It’s going to be stellar.”

Stereophonics
Sam Fender
The 1975
Twenty One Pilots
Florence & The Machine

(category judged by public vote) includes the five most played songs of 2019 from The Official Big Top 40, the UK’s biggest chart show.

Awarded for the Best News Moment or Interview as suggested by the listeners of LBC.

Awarded to the artist responsible for the Most Played Song on Global’s radio stations in 2019.