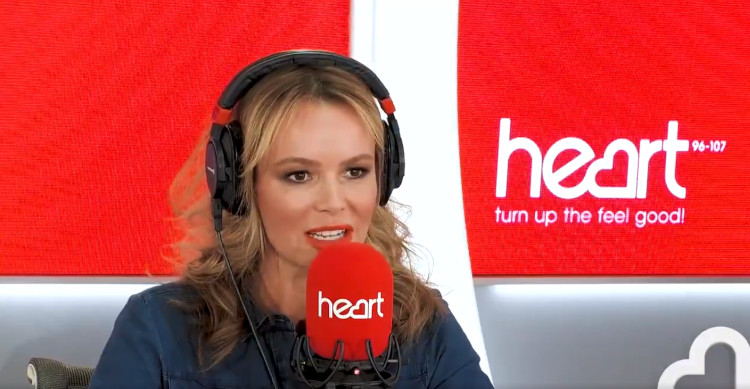 Amanda Holden shared with Jamie Theakston on Heart Breakfast this morning that her eldest daughter Lexi has banned her from attending school sports day this Friday.

Jamie wanted to know why and asked: “Is it because you get involved in the parent/child… are you a bit super competitive?

She also revealed that when Lexi was in year 4, she saw Colin Firth on a space hopper in the dad’s race, as his children go to the same school. Amanda said all the parents were told they weren’t allowed to get their phones out to take pictures. Amanda did, hence Lexi’s ban!

Unlike Lexi, Amanda’s younger daughter Hollie is excited about the sports day, but so is Amanda it seems, as she explained what she and the other mothers at the school have packed to help get through the event.

“It’s forecast to rain, that’s my biggest worry,” Amanda said, revealing, “I’ve had all the mums on the WhatsApp group saying, ‘who’s packed the wine’?

“You know those flasks that keep things hot and cold? Well I’ve filled a coffee dispenser with wine and ice. Before I left (for work), I was popping wine bottles! Isn’t that terrible, at 5 o’ clock in the morning?”

All the parents have to let each other what they’re taking for the picnic, Amanda says she’s taking the sandwiches, crisps and dips. She joked: “I’m Reese Witherspoon, I’m so organised,” adding, “I’ve even packed away some cutlery and napkins.”

Tune in to the all new Heart Breakfast with Jamie Theakston and Amanda Holden, weekdays from 06:30 – 10:00 across the UK.