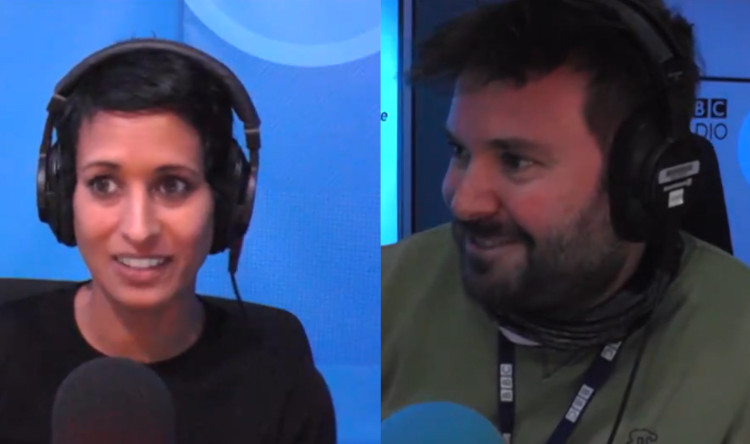 Naga Munchetty had to say sorry to newsreader Nick Hatfield during her show this morning on BBC Radio 5 Live.

While reading a news update, Nick was suddenly cut off as Naga started randomly pressing buttons and muted his voice.

At the end of the bulletin Naga apologised by saying: “Nick, I’ve got to say sorry. Do you know what I did?”

Nick did know, he replied: “You were pressing buttons you shouldn’t have by the looks of it!”

“Yeah,” Naga admitted, “I do like pushing a button, particularly buttons I’m told I’m not allowed to push, but I pressed the talk back button and didn’t realise.

“It’s the button we press when we try to talk to our studio managers or studio directors or producers so we’re not heard. But I wasn’t meant to touch that one, I was meant to touch the cut one and I touched the wrong one.

“But you know I’m learning and I’m sorry.”

Nick reassured her, saying: “You are, learning on the job. I think you just got bored of what I was talking about didn’t you!”

This was followed by a short silence while Nick was still talking and Naga laughed: “I just cut him off again! I love this button pushing, I never get to push buttons normally.”

If that wasn’t enough, she did it again and when Nick came back on he joked she should do it when talking to a politician that she’s sick of hearing what they’re talking about.

“Would I? Would I?” Naga teased, “Could you imagine such a thing? Nick I apologise, I will never touch that button again… in the next half an hour!”

“I do like pushing buttons, particularly ones I’m not allowed to push”
@TVNaga01 says she’s still “learning on the job” after accidentally silencing the news during her @BBC5Live programme 🔘🤫