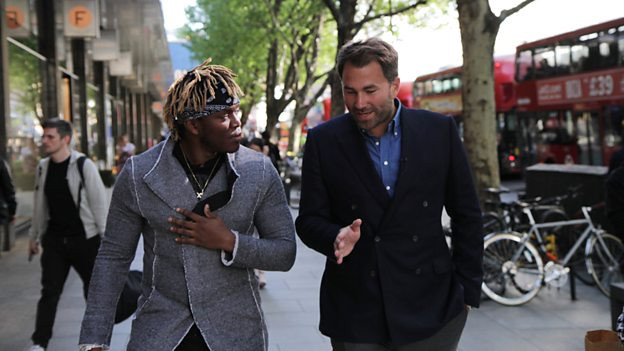 A new podcast by BBC Radio 5 Live for BBC Sounds features sports promoter Eddie Hearn with a look into his life at the top of world sport, as well as interviews with some of the famous people he meets.

In ‘No Passion, No Point’ Eddie will be talking to characters from the worlds of sport, entertainment and politics, hearing about their dedication, hard work and what it takes to get to the top of the game.

The podcast is recorded ‘on the fly’ wherever he goes, with the opening episodes available on BBC Sounds from today (Wednesday 29 May).

He talks to world heavyweight champion boxer Anthony Joshua ahead of his title fight against Andy Ruiz Jr in New York this Saturday. This is Hearn’s first major event in the United States, and he’ll speak exclusively to Joshua ahead of this crucial moment for them both.

Eddie also meets YouTuber and boxer KSI who was part of the ‘the largest event in YouTube history’ when he faced Logan Paul in the biggest white-collar boxing match ever staged in August 2018.

And, in Washington DC, Eddie’s joined by former England and Manchester United captain Wayne Rooney, who holds the record for most goals scored for both his club and country.

Speaking of the podcast No Passion, No Point, Eddie Hearn said: “I’m so excited to be working with 5 Live and BBC Studios on my first podcast. The idea evolved from a boxing podcast to one that encompasses not just the sport I love but also business, life and the drive to succeed. Passion is at the heart of what I do and I can’t wait to share the stories of this brilliant pool of talent who feel the same way.”