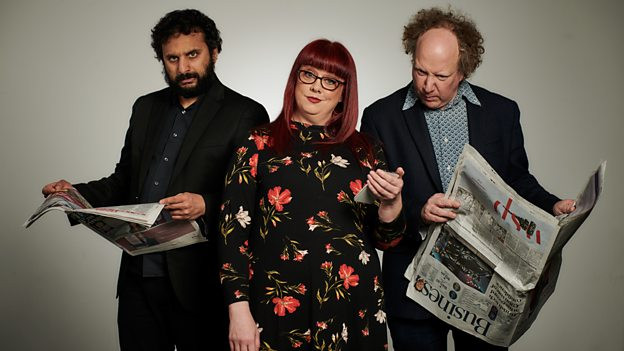 Nish Kumar, Angela Barnes and Andy Zaltzman will each host a series of BBC Radio 4’s The News Quiz next year.

Nish Kumar is a regular on TV, and on radio has previously hosted four series of Radio 4 Extra’s Newsjack and two series of his Radio 4 programme Spotlight Tonight With Nish Kumar.

He’ll be in the hot seat from 3 January and says: “I’m delighted to be taking the reins at the News Quiz. I look forward to unpacking the country’s continued descent into a Mad Max style dystopia/Britain’s glorious rise from the ashes into a bold new tomorrow (delete as applicable).

“I look forward to sharing this honour with two of my dearest show business friends, Angela and Andy.”

Angela Barnes, who won the BBC New Comedy Award in 2011, has been both a writer and panellist for The News Quiz, has hosted Newsjack on 4 Extra, and the second series of her Radio 4 show Angela Barnes: You Can’t Take It With You.

Angela says: “To say that I’m chuffed to be asked to be one of the new chairs of the News Quiz on Radio 4 is an obscene understatement, it’s literally the job of my dreams, though I’m hoping that when I do it for real the audience and I will remain fully clothed.

“It’s such an exciting and daunting prospect to follow in the substantial footsteps of Took, Hoggart, Toksvig, Jupp et al, so I’m delighted that I’ll be doing it alongside Nish and Andy.

“I hope between us we can guide the listeners through whatever nonsense 2020 throws our way, while introducing exciting new voices and some of the best hair in topical comedy.”

Comedian Andy Zaltzman’s radio work includes writing and hosting Radio 4’s Andy Zaltzman’s History Of The Third Millennium, Empire-ical Evidence, and The Department with John Oliver. He also appeared on The News Quiz back in 2006.

Andy says: “It is a great honour to be entrusted with holding all news to account along with Angela and Nish. Over the course of the year, I hope we will be able to quiz the news so hard that it grows up and starts behaving its age.

“There has been more news than average over the last 100 to 120 years, so, assuming that trend continues, we should hopefully have plenty of news to address.”

The New Quiz was created by Jeremy Lloyd and first broadcast in 1977 with Barry Norman as chairman.