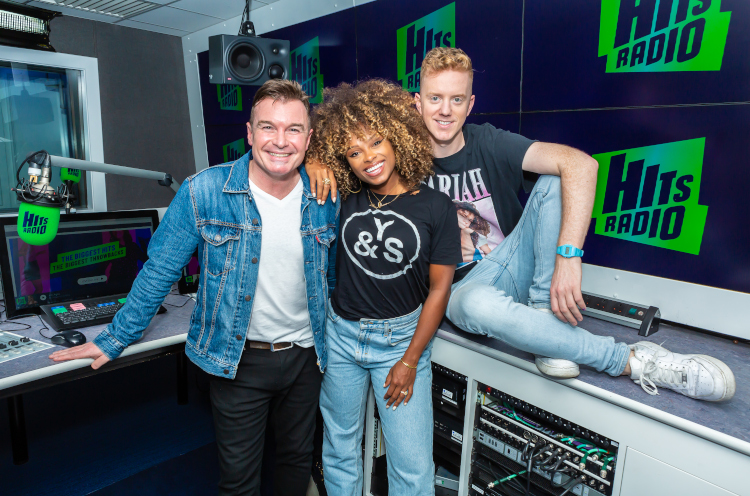 Rumours about who would host the new Hits Radio breakfast show have been rife over the last few weeks, with singer and TV personality Fleur East being frontrunner.

Well, today it’s been confirmed that Fleur, together with Greg Burns and James Barr will be the team to present the new show which is set to launch on Friday 12 July.

Fleur will lead the show which will be broadcast live from Manchester weekday mornings. She was a finalist on The X Factor in 2014. Her debut single ‘Sax’ had over 110 million streams on Spotify and 75 million plays on YouTube.

Last year, she was a contestant on I’m a Celebrity… Get Me Out of Here and has since featured as a regular presenter on ITV’s This Morning.

Fellow host Greg Burns is an award-winning comedian and presenter who has held long-running Drivetime shows on both Heart and Capital FM, as well as a successful show on Virgin Radio.

He recently returned from Australia where he hosted a national radio morning show for the last two years.

James Barr is an MTV presenter and comedian who co-hosts one of the UK’s leading LGBTQ+ comedy award-winning podcasts and is taking his first solo show to the Edinburgh Festival Fringe this summer.

Big names from the world of entertainment and music will regularly join the presenters on the show, which promises to bring all the biggest things happening right now and to never take themselves too seriously.

Fleur East said: “We’re buzzing with excitement to launch this new show and be a morning companion for so many people around the UK. There will be early starts, but Breakfast Radio has the power to brighten up any morning, and we’re all about bringing that fun and positive energy.”

This will be the second breakfast show since Hits Radio was launched just over a year ago, with other schedule changes recently announced, including Sarah-Jane Crawford moving from evenings to afternoons and Jordan Lee joining to fill the slot vacated by Sarah-Jane’s move.