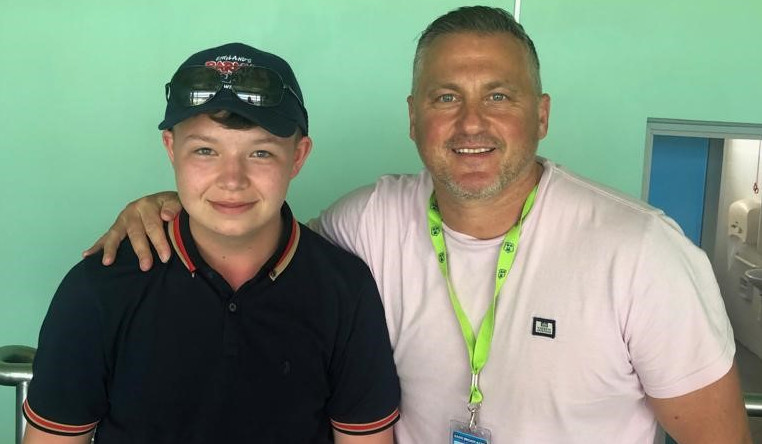 Yorkshire fan Adam wrote the winning entry into the Barmy Army song competition which was read out live on talkSPORT and has now had the chance to sing it at the Kensington Oval in Barbados.

In his first overseas tour, accompanied by his mum, Adam met a number of his heroes including England captain Joe Root, England spinners Adil Rashid and Moeen Ali and talkSPORT presenters and England legends Darren Gough, Steve Harmison and David Lloyd in the commentary box.

Adam’s song ‘Keeper Batsman’ was dedicated to England gloveman Ben Foakes who he sang the song to on the outfield during the first Test Match.

Adam Dean said: “I’m over the moon, I even got some of Ben Foakes’ gloves – it’s been tremendous. I’m really thankful to everyone at talkSPORT and the Barmy Army.

“The song took me hours to write but it’s been worth it. I sat in the sun while my mates were working on their GCSES to write it.

“I thought it was some scam at first, my mum was going to report it to the police! The song has been going round the England team – it’s mad!”

talkSPORT presenter Darren Gough said: “It was a real pleasure to meet Adam and we hope he had the best time in Barbados! From showing him around the commentary box it was clear he’s a proper cricket fan as well as a true lyricist! But let’s hope for a stronger performance from England in Antigua.”

talkSPORT has the exclusive rights to all England’s major overseas tours until 2021 and will broadcast the second Test Match from Antigua on talkSPORT 2 starting on Thursday.