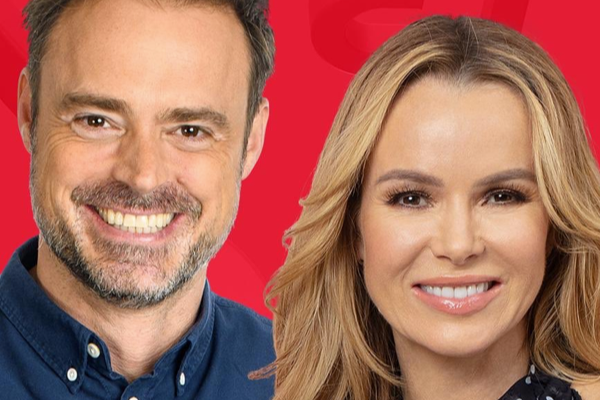 If you’re a fan of your local Heart breakfast show, it’s time to say goodbye as it is set to be replaced with a new programme with Jamie Theakston and Amanda Holden.

Also joining Jamie & Amanda is singer and TV personality Ashley Roberts, who will join the Heart Breakfast team as the resident showbiz expert.

Every Heart radio station the UK will receive a new national show from June 3rd, leaving the current mix of locally based presenters just five weeks to wrap things up.

Jamie Theakston currently hosts the Heart breakfast show in London, and until last year was co-hosted by Emma Bunton.

Amanda said: “I’ve spent years in the car listening to Heart while travelling to work or doing the school run with my daughters. So it feels incredibly surreal to be announced as the new national Breakfast co-presenter alongside the fab Jamie Theakston. Jamie and I go back more years than I can remember so I have no doubt that working with him will be hilarious for everyone. I’m not sure my face is ready for the early starts mind you, but I hope we can make the listeners laugh along with us each morning!”

Heart Breakfast’s co-presenter Jamie added: “This is a massively exciting opportunity in taking this show nationwide and I’m beyond thrilled to have my friend Amanda join me in the fun. Listeners can expect the unexpected from Amanda, just as I have learned to do over the years!”

According to the Sun newspaper the Britain’s Got Talent judge’s deal with Heart is for £3million over two years, which it says, makes her Britain’s best-paid female showbiz host and will see her earning more than Radio 2’s Zoe Ball, who earns around £1.2m a year.

.Heart Breakfast is going NATIONAL on June 3rd.I’m thrilled to finally announce I’ll be hosting what will NOW be the Uk’s biggest commercial Morning Radio show alongside @JamieTheakston I’m excited to be part of the heart FM team! Look forward to waking you all up @thisisheart ♥️ pic.twitter.com/P7aa4JVGWj

Say hello to your brand new national Heart Breakfast show with @JamieTheakston and @AmandaHolden, starting June 3rd! With @ImAshleyRoberts joining them with all your showbiz news https://t.co/Ao2J9IPNrg