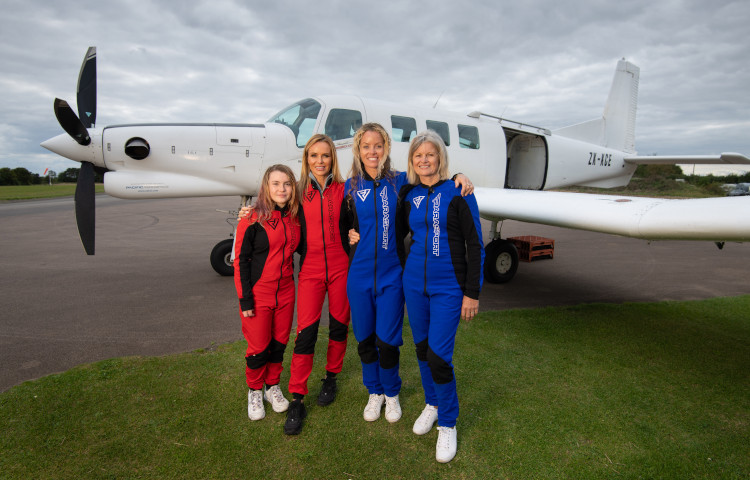 Amanda Holden says the charity skydive she did yesterday (Tuesday) was a dream come true and made her feel like an alien, but fear didn’t kick-in because of the instructors, plus it was for a good cause.

The jump out of a plane in Brackley was to raise funds for Heart’s charity, Global’s Make Some Noise.

Amanda wasn’t alone, she jumped with her mum Judy, 69, her sister Debbie and 17 year old Charlotte Hatton, who is a beneficiary of a charity helped by Global’s Make Some Noise called Holding on Letting Go.

Charlotte received bereavement support from the charity after she lost her mum to cancer and she made the jump because it’s something her mum had always wanted to do and never got the chance.

“I found an overwhelming sense of calm as we went up in the plane,” Amanda said, adding: “It felt like the most incredible experience and a dream come true and real box ticked.

“The guys who looked after us were so calm and collected and all of us were in great spirits flying up into the sky it felt very serene when the doors open, and I had absolutely no worries about just jumping out.”

Looking out of the plane door, Amanda says it took her back to when she was a little girl when she thought it was possible to jump into the clouds and that they may feel like cotton wool, so it was like a little fairy tale.

Amanda volunteered to go first because she didn’t want to watch anyone else jump out and get put off. She says: “Once we were strapped to our tandem man it was difficult physically to turn around, my mum, sister and I all shouted that we loved each other.”

Describing the experience, Amanda admitted: “It felt like nothing. I felt like an alien. And kept questioning why my fear didn’t kick in. I think it was because of the excellent instructors and the fact that the whole thing was for such a good cause.

“Just before I stepped out, I held onto Charlotte’s hand and said to her – your mummy would be so proud. This is the closest to heaven that you will get. I know she’s looking down on you.

“She is one of the most feisty fearless young women I have met. To be so open and honest about the difficulties she has had and talking so brilliantly about grief has been a real eye-opener. I know that we will stay in touch beyond this sky jump.”

Take a look at the whole event in the video below:

This is the moment @AmandaHolden and Charlotte from charity ‘Holding on, Letting Go’ jump 10,000 feet out a plane in memory of Charlotte’s late mother, and to raise money for @MakeNoise! Have your tissues at the ready! ?