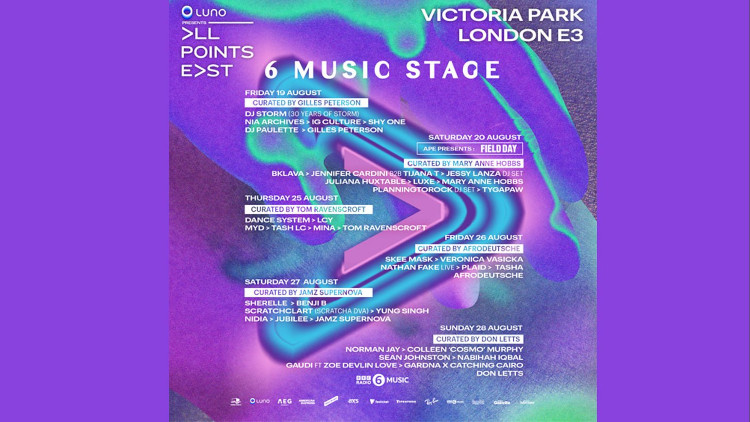 The 6 Music Stage is returning to the All Points East Festival, which takes place in Victoria Park, London from Friday 19 – Sunday 28 August.

In addition to performing DJ sets on the stage, the station’s presenters will also curate the acts on the night they are performing themselves.

Gilles Peterson will choose the line-up on Friday 19 August, Mary Anne Hobbs on Saturday 20, Tom Ravenscroft on Thursday 25, AFRODEUTSCHE on Friday 26 August, Jamz Supernova on Saturday 27 and Don Letts on Sunday 28 August. All presenters will also perform DJ sets themselves on the 6 Music Stage, on the dates they are curating the line-up.

As broadcast partner, 6 Music will play out performance highlights from the 6 Music Stage on air. Gilles Peterson’s show will come live from All Points East presents Field Day on Saturday 20 August (3pm-6pm), featuring a set from Gilles himself. Then on Friday 26 August, AFRODEUTSCHE and Tom Ravenscroft will present a special show from the festival (7pm-10pm), featuring sets from their curated line-ups.

On Saturday 27 August, Jamz Supernova On 6 (1pm-3pm) will be live from Victoria Park. In addition, Mary Anne Hobbs, Tom Ravenscroft and Don Letts will revisit some of the best moments from the line-ups they curated in their usual 6 Music shows between Monday 22 August and Sunday 4 September.

All shows will be available to listen to on BBC Sounds after broadcast.

Mary Anne says: “We broke new ground with the pioneering All Queens stage at APE in 2021. It was the first time we’d been back on a festival stage for two years and it was emotional. It’s a joy to return with my 2022 line-up, loaded with incendiary young artists, with roots in many different cultures.”

Jamz says: “Really excited to be playing APE again, last year was a real highlight for me. Nothing better than being in your hometown. The stage, the sound and the ravers made it magical. This year, I’m really excited to be curating my own line-up on the 6 Music stage, watching the DJs smash it and celebrating the end of the day by watching James Blake!”

Camilla Pia, Assistant Commissioner, 6 Music says: “The 6 Music Stage at All Points East was a triumph last year, so I’m delighted that we’ll be back in 2022 with even more of our DJs getting involved this time. AFRODEUTSCHE, Don Letts, Gilles Peterson, Jamz Supernova, Mary Anne Hobbs and Tom Ravenscroft will be curating our stage across all six days of the festival, selecting some of the most exciting DJs in the world to play in front of APE audiences. Each curator will bring a different flavour and feel to the stage and each line-up will be unmissable, I can’t wait to see how it goes down!”

The full line-up for the 6 Music stage is as follows:

Jennifer Cardini & Tijana T (back to back)