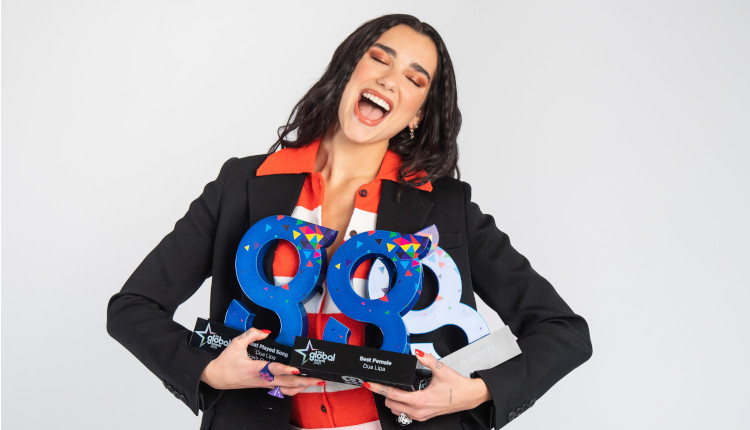 The winners of The Global Awards 2021 were revealed today (Monday 3 May), with Dua Lipa picking up three awards.

Now in its fourth year, The Global Awards brings together Global’s radio stations; Capital, Heart, Smooth, Classic FM, LBC, Radio X, Capital XTRA and Gold, to honour the biggest stars of music, news and entertainment. Because the awards ceremony is unable to take place this year, Global announced the winners on air, online and on Global Player to fans.

Following the success of ‘Future Nostalgia’, Dua Lipa was the big winner at the awards. The star was named Best Female, Best British Artist and her huge hit ‘Don’t Start Now’ was the Most Played Song across Global’s radio stations in 2020.

Little Mix picked up the Best Group prize – an accolade they won at the inaugural Global Awards in 2018 and again in 2019. Their win sees them join Dua Lipa as the most celebrated artists in Global Awards history, with both acts receiving six trophies over four years.

Also celebrating wins are Harry Styles, who was named Best Male, Cardi B who was awarded Best Hip Hop or R&B and Nothing But Thieves who won Best Indie.

Joel Corry was named Rising Star, following in the footsteps of previous winners Mabel, Aitch and Halsey, in recognition of his breakthrough success in 2020.

Congrats to @DUALIPA as she becomes the most celebrated solo artist at #TheGlobalAwards, winning six trophies over four years! Here’s #DuaLipa reacting to the news that she's won this year's Global Awards for Best Female, Best British Act, and Most Played Song ??? pic.twitter.com/OIGEwU2p8a

Here’s all the winners:

BEST INDIE ACT
Nothing But Thieves