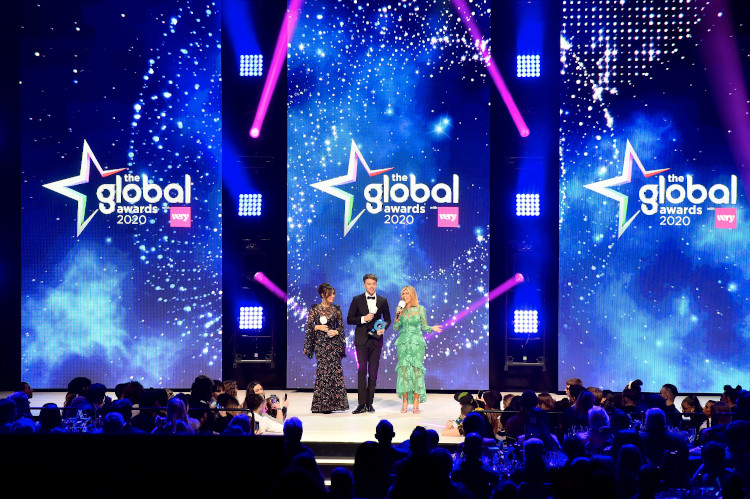 The Global Awards celebrate the stars of music, news and entertainment across a wide range of genres.

There were live performances from Camila Cabello, Ellie Goulding, Tones and I, Aitch, Aled Jones, Russell Watson and Stereophonics.

Lewis Capaldi won big, scooping two major awards – Mass Appeal – an award which recognises an artist’s true crossover appeal – and Most Played Song for ‘Someone You Loved’. Harry Styles won Best Song of 2019 with Metro for ‘Lights Up’.

Also winning two awards, Stereophonics won Best Indie and were also honoured with the Global Special Award in recognition of their remarkable career which spans over 25 years and their contribution to music and entertainment.

Jonas Brothers were crowned Best Group, with Ed Sheeran winning the award for Best Male and Camila Cabello winning Best Female. The star also opened the show with a stunning performance of her hits ‘My Oh My’ and ‘Havana’.

Dua Lipa won Best British Act while Tones and I scooped the award for Best Pop.

The Global Awards also crowned Aitch with the Rising Star Award, recognising an artist who has achieved breakthrough success in 2019.

Showing the musical diversity of the awards, the public voted Sheku Kanneh-Mason as Best Classical Artist.

The public vote also named Stormzy the winner of Hip Hop or R&B. He thanked Capital and Capital XTRA listeners for their support via video message, saying it was “an honour once again” to take home his second Global Award.

The inaugural winners of The Global Awards’ new category for 2020, Chris and Rosie Ramsey were voted as recipients of Best Podcast for Sh**ged, Married, Annoyed.

The public also submitted nominations for The LBC Award, which saw LBC listeners choose a story that has resonated with them over the last twelve months. PC Stuart Outten – the heroic officer dubbed “Britain’s Bravest Police Officer” after he took down a machete attacker with a taser last August – was presented with the award by LBC’s Nick Ferrari.

Finally, Smooth’s Jenni Falconer gave out the Very Award to Andy Smith. The Very Award recognises a special someone from a Global’s Make Some Noise-supported charity who has gone above and beyond to help young people in their communities through the medium of music.

Andy is co-founder of the London-based charity Regenerate, which supports disadvantaged and vulnerable children and young people in Roehampton and Wandsworth, and runs a range of projects and initiatives to help young people uncover their potential and nurture their hopes for the future.

Ashley Tabor-King OBE, Global’s Founder & Executive President, said: “The Global Awards with Very.co.uk is a very special evening celebrating the biggest stars of music, news and entertainment, all together on one huge night.

“Our third awards show was a glittering and spectacular affair – only Global can bring together artists from such a wide range of genres and celebrate such a broad spectrum of remarkable achievements.

“Thank you to all those who voted and to our wonderful performers, and huge congratulations to every nominee and winner of The Global Awards 2020 with Very.co.uk!”