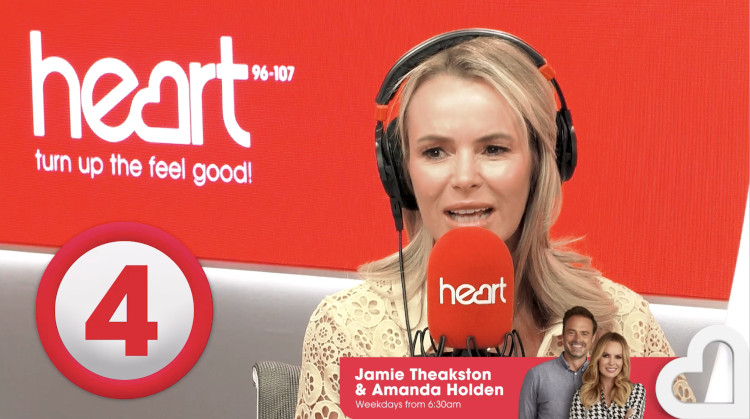 X-Men stars Michael Fassbender and James McAvoy were guests on the Heart breakfast show with Jamie Theakston and Amanda Holden this morning, when things got a little out of hand.

It all got a bit naughty when they played “No Holden Back”, the game where you have to say the first three things you can think of in answer to a question, resulting in some hilarious reactions.

Thanks to our special guests #MichaelFassbender and #JamesMcAvoy for over sharing their naughtiest stories on the All New Heart Breakfast with @JamieTheakston and @AmandaHolden this morning! 📸❤️😂 #DarkPhoenix #XMen pic.twitter.com/wSYWYwyE4p

The first question went to Amanda, with Jamie asking her to name the most embarrassing things her child has ever done. The five seconds allowed to give an answer were up before Amanda had even named one of them.

Jamie then asked Michael to name three things you do in the bedroom. He could only come up with two, saying: “Sleep, wake up and err..” Amanda jumped in and suggested: “Make love?” to which, Michael replied: “Yes that’s my favourite thing!”

James was asked for three embarrassing things he’d done. He said that one was falling off a building but when naming the second, he began by saying: “I once mistook, oh err I can’t tell you, it’s too terrible.” We’ll probably never get to know what it was.

Other questions including things that make you cry and things you shouldn’t do in the car produced some interesting answers, but perhaps the funniest was when Jamie asked Amanda, three things you would not want to find in your house?

You can see Amanda’s classic answer to the question in the video below.

Things got a little naughty with #MichaelFassbender and #JamesMcAvoy in our ‘No Holden Back’ game on the All New Heart Breakfast with @JamieTheakston and @AmandaHolden! 😵👀🙈😂 pic.twitter.com/GkLlDJRwBz

You can hear the new Heart breakfast show with Jamie Theakston and Amanda Holden, weekdays from 06:30 – 10:00 across the UK.