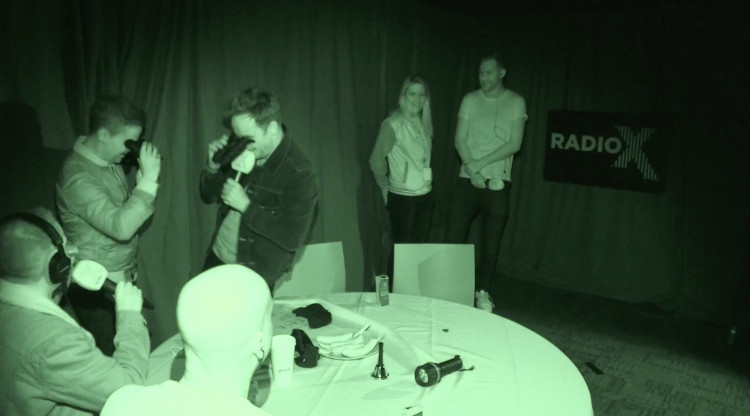 Armed with night vision goggles, Ant and Dec joined Chris Moyles as mystery guests on his Radio X Breakfast show this morning (Friday 21 February), which he was hosting in complete darkness as part of his birthday celebrations.

While Chris was doing the show in the dark, Radio X listeners were able to watch it in night vision via infrared cameras which streamed live on Facebook.

When they arrived, Ant and Dec initially unnerved Chris as they started touching his face in the dark without revealing their identities and then sang him happy birthday.

“This is so creepy” Chris commented, but when they’d finished the song and said good morning to him, he immediately knew who they were.

Chris then asked about the new series of Saturday Night Takeaway, which begins a new series on ITV tomorrow evening. Ant and Dec told Chris they’re doing a Get Out Me Ear with Mark Wahlberg, where they give him an earpiece and he has to do everything they tell him.

Declan said that Mark took the earpiece and looked at them without cracking a smile and said: “By the end of this, you two will be saying and doing everything I tell you to do!”

Ant added: “It was a very worrying 10 minutes.”

Also during the show this morning, Chris interviewed naked cleaners but obviously didn’t know that they were standing in front of him in the nude and there was a performance by singer-songwriter Tom Grennan in the dark!