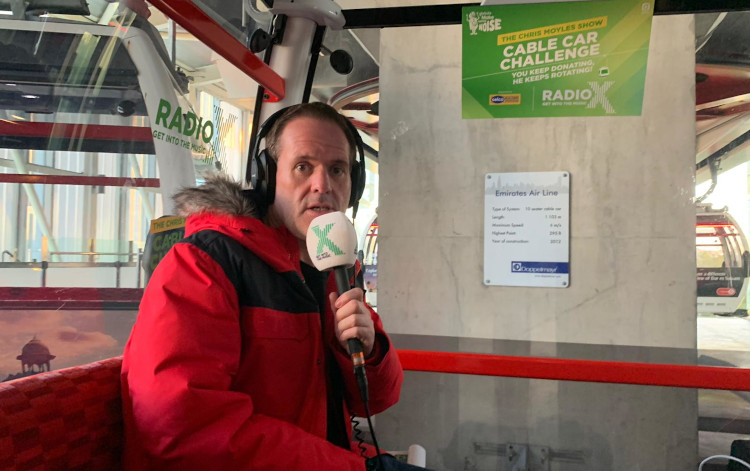 It seems presenters being in dangerous places in aid of charity is the thing after Roman Kemp from Capital dangled over a cliff yesterday and today it was Chris Moyles’ turn as he presented his Radio X breakfast show from a cable car suspended 100s of feet above the River Thames.

Chris had to face his fear of heights to raise money for Radio X’s charity Global’s Make Some Noise, presenting his show from London’s Emirates Air Line, and had to stay in the cable car if his listeners kept donating towards various fundraising milestones.

When he got into the cable car, Chris had to be calmed down by breakfast show team mate Dominic Byrne, who joined him in it for its first rotation.

Chris shouted: “Oh lord! Oh my good god, oh my lord it’s high! It’s a bit wobbly! Oh my god! It’s wobbling from side to side. Would you like me to be honest? I’m more nervous than I thought I’d be!”

Listeners kept donating so Chris kept rotating and the whole show was streamed on YouTube.

Various guests joined Chris to distract him from the drop below including Go Compare man Wynne Evans – who led Chris in a rendition of Nessun Dorma and comedian Jon Culshaw.

Probably one very welcome guest was Andy Puddicombe, creator of Headspace, who joined Chris in the car to teach him much needed meditation techniques!