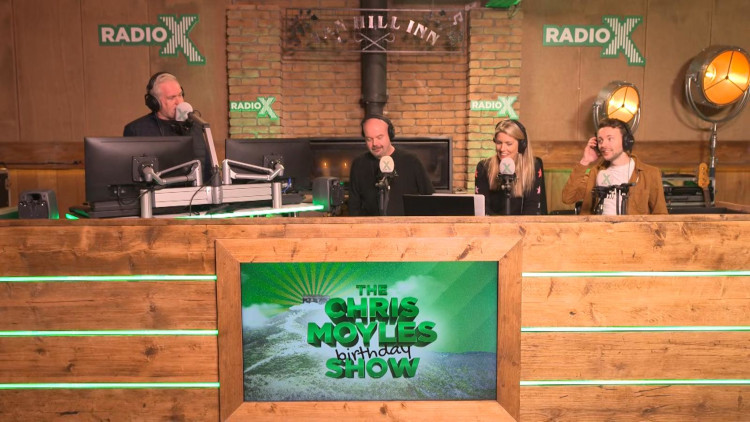 The Yorkshire pub, which at 1,732 feet (528m) above sea level is the highest in the UK, became world famous last November when customers attending a gig by Oasis tribute act ‘Noasis’ were snowed in for days after a snowstorm left them and the band stranded.

Chris was surprised with a trip up to the pub by his team – Dominic Byrne, Pippa Taylor and James Robinson – in honour of his birthday, and so this morning’s show was broadcast live from the historic Tan Hill Inn.

The Chris Moyles Birthday Show will be LIVE tomorrow morning from the highest pub in Britain! Watch it as it happens tomorrow on @GlobalPlayer ? pic.twitter.com/TbgzRUsVPM

They were joined by Noasis, and some of the snowed-in punters returned for a reunion. Chris’s parents also made the trip to the pub to surprise him on his birthday.

We've got @NoasisOfficial with us at the highest pub in Britain! The Chris Moyles Birthday Show is LIVE to watch on @GlobalPlayer until 10am pic.twitter.com/XEyjOQkbhx

There was a birthday cake but unfortunately it didn’t survive the train journey north and ended up a little squashed.

It wouldn't be a birthday celebration without a little cake! ? Listen back to The Chris Moyles Birthday Show on @GlobalPlayer pic.twitter.com/N2ZjvJgNXo

You can catch up on highlights from The Chris Moyles Birthday Show on Radio X, which was broadcast live from the Tan Hill Inn today (Tuesday 22nd February), exclusively on Global Player.