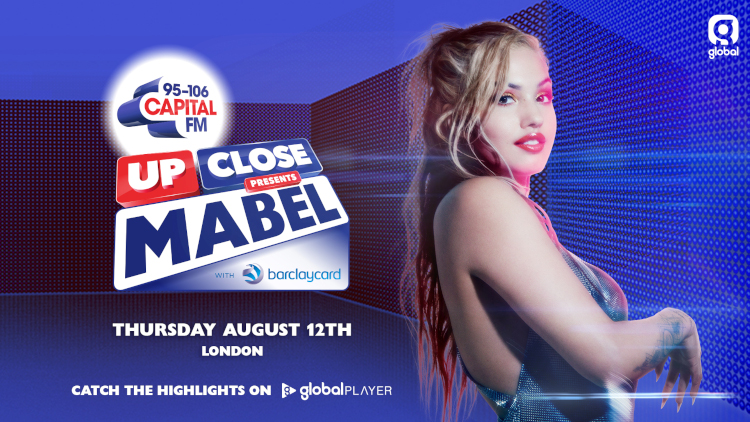 Mabel is to play the second gig in this summer’s Capital Up Close Presents series of live music events from the station.

The gig will be on Thursday 12 August, featuring Mabel performing some of her big hits to a live audience both in the venue for competition winners and streamed live on Global Player. She’ll also chat to Capital Breakfast’s Roman Kemp, Sonny Jay and Sian Welby, who will host the intimate gig.

This will be the second in-person event in the series Capital Up Close at London’s Under The Bridge venue, after Anne-Marie played a live gig in London earlier this week.

The singer-songwriter is known for her smash hits including ‘Don’t Call Me Up’, ‘Mad Love’ and ‘Boyfriend’ and has climbed The Official Big Top 40 chart with her huge hit ‘Tick Tok’ with Clean Bandit. Mabel has also collaborated with artists including AJ Tracey, Tiesto and Jax Jones.

Mabel said: “Capital Up Close with Barclaycard will be a really epic night for both me and the fans, and I can’t wait to play for you all! I’ve missed live music so much, it means everything to me. This is going to be such a special show.”

Capital Breakfast’s Roman Kemp said: “We’re so excited for our second Capital Up Close live show. We’ve loved welcoming our listeners back to a live gig and we know the next show with Mabel will be amazing!”

Listen to Capital for the chance to win exclusive access to Capital Up Close presents Mabel with Barclaycard and there will also be a Barclaycard prize draw for additional chances to win.

How buzzing are you to see @Mabel performing all of her bangers at Capital Up Close Presents Mabel with Barclaycard? ? pic.twitter.com/5neDZoXKVd