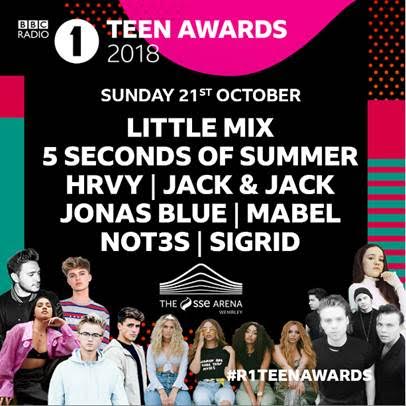 Singing live on the night will be Little Mix, 5 Seconds of Summer, HRVY, Jack and Jack, Jonas Blue, Mabel, Not3s and Sigrid.

The event is hosted by BBC Radio 1 presenters Greg James, Maya Jama and Mollie King, and more acts from television, film and sport are still to be announced.

Radio 1’s Teen Awards is the biggest teen event in the pop music calendar and shines a light on some of the UK’s most inspirational teens, seeing them crowned Teen Heroes of 2018 in front of an audience of 10,000 14-17 year olds. Nominated by Radio 1 listeners, the deserving Teen Heroes will be chosen by a panel of judges consisting of Radio 1 DJs and former Teen Heroes.

Nominations for the celebrity categories, as voted for by Radio 1 listeners are:

– Best International Group – 5 Seconds Of Summer, BTS, The Carters, The Chainsmokers, Panic At The Disco

This is going to be HUGE! Performing at this year's Teen Awards ?

Greg James says: “It’s amazing when Radio 1 sells out Wembley Arena and we can’t wait to be back again this year to bring you some of the biggest stars in the world for a HUGE party in October.”

Maya Jama says: “I am SO excited to host Radio 1’s Teen Awards with Mollie and Greg. Not only do we have the hottest artists performing, but we get to honour all the amazing teen heroes and recognise all their incredible achievements!”

Mollie King says: “I’m so excited to be hosting Radio 1’s Teen Awards. I hosted the show with Grimmy back in 2011 and we had such a laugh – I’m looking forward to doing it all over again with Greg and Maya. The Teen Awards is such a fantastic event that celebrates teen heroes and amazing music. I can’t wait – see you there!”

Little Mix says: “We are so excited to be performing at Radio 1’s Teen Awards so we will see you all there.”

5 Seconds Of Summer says: “We can’t wait to be back in the UK playing shows. It’s one of our favourite places to play. To be able to play Radio 1’s Teen Awards before our own tour starts is the perfect way to kick things off! Thanks to Radio 1 for having us, can’t wait to see everyone there!”

Sigrid says: “I am very, very excited to play the Radio 1 Teen Awards. It’s gonna be so much fun! See you there.”

You can hear everything on BBC Radio 1 from 1pm on Sunday 21st October with coverage on BBC Two. Listeners can also watch on BBC Radio 1’s iPlayer later that evening, with highlights available to watch on Radio 1’s YouTube channel.

Tickets will be available from 5pm on Thursday 13th September at BBC.co.uk/Radio1