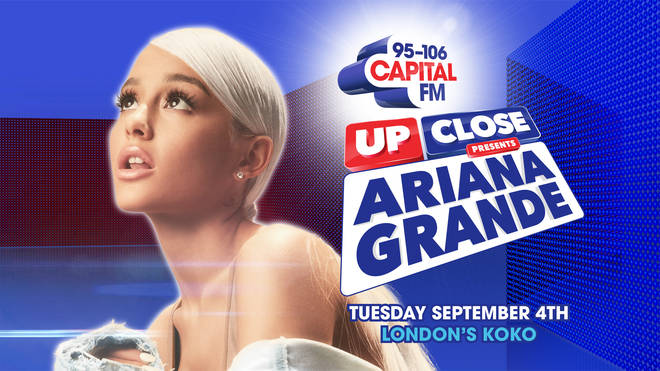 Capital is bringing Ariana Grande to London to perform her first live European show in 2018.

Listeners will be able to win tickets to the intimate gig – happening at London’s KOKO on Tuesday September 4th – to celebrate the release of her new number one album, ‘Sweetener’.

Capital made the announcement at 8am Tuesday after teasing “Something sweet in coming” over the Bank Holiday weekend.

This is going to be sweet… ? Are you ready to get #CapitalUpClose to @ArianaGrande? ☁️ https://t.co/3OkDWxg7lc pic.twitter.com/aslf7xdPky

Ari’s been holding intimate ‘Sweetener’ sessions to celebrate the new album, and her Capital Up Close gig exclusively for Capital listeners comes after her shows in New York, Los Angeles and Chicago.

Ari has already had three platinum-selling albums, she also spent three weeks at the top of The Official Vodafone Big Top 40 chart earlier this year with ‘No Tears Left To Cry’.

If you don’t get tickets with Capital, try BBC Radio 1, as she’s in the Live Lounge the next day and Greg James is giving away tickets on his new breakfast show.

.@ArianaGrande will be in the Live Lounge on Weds 5th September we're giving 7 fans a pair of tickets to watch her perform ??

Want to be there? Listen to Breakfast with @GregJames for your chance to WIN!