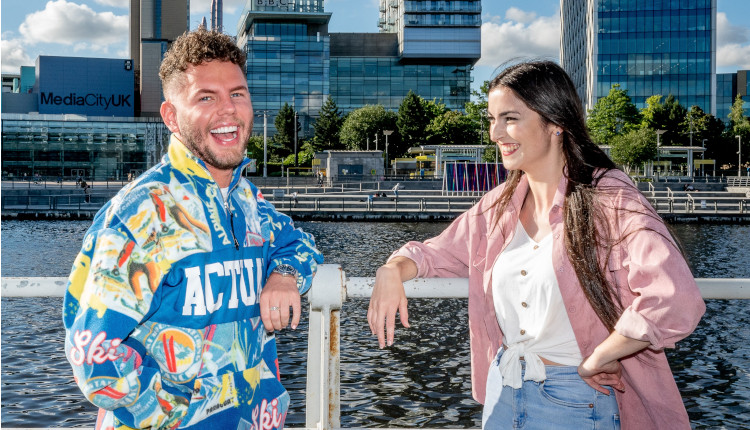 Dean McCullough and Vicky Hawkesworth are to host a new afternoon show on BBC Radio 1, from Monday 5 September.

Dean and Vicky will be taking over from Scott Mills and Chris Stark who announced their departure from Radio 1 last Friday 1 July.

It will be the first weekday programme to move out of London and broadcast from Salford as part of the BBC’s Across The UK plans, announced by the Director General in 2021.

Both Dean and Vicky were given their first opportunity to host on the station during the 2020 festive period as part of Radio 1’s Christmas Takeover – an initiative created by Head of BBC Radio 1, Aled Haydn Jones – which provides a valuable springboard for emerging presenters, giving them a once in a lifetime opportunity to broadcast on the UK’s biggest youth radio station.

From there, Northern Ireland’s Dean permanently joined Radio 1 in September 2021 to host weekends (Friday – Sunday, 10.30am – 1pm) and has quickly proved a huge success amongst listeners. He has brought his infectious energy to weekend mornings and has interviewed stars such as Anne-Marie, Aitch and Tom Grennan.

Bolton born Vicky, currently presents regular shows on BBC Radio Manchester and GAYDIO and has covered a range of shows across Radio 1. She most recently hosted the BBC iPlayer coverage of Radio 1’s Big Weekend 2022 in Coventry as well as Radio 1’s coverage of the Platinum Jubilee Concert.

Dean says: “I literally don’t know what to say, this is wild. Being given the opportunity to launch a brand-new daytime show on Radio 1 with the most talented production team and co-host is a full on dream come true.

“Vicky and I did the Christmas presenter search together in 2020 and I loved her from the second I met her. It’s bittersweet because like so many millions of people I am a huge fan of Scott & Chris. They are hands down the best at doing the radio, ever.

“I’m really going to miss them on Radio 1 and hope that their brilliant listeners join us for this new chapter in September. I’m so grateful that this is happening, thank you Radio 1 for believing in me.”

Vicky adds: “In all honesty, I don’t think there are words that can live up to how incredibly excited I am. I am quite literally about to live my dream and I can’t wait to get going.

“I feel extremely honoured to be in this position, Scott and Chris are the best that radio has to offer, a phenomenal team that have kept me laughing and smiling over the years and it’s privilege to follow after them.”

Aled Haydn Jones, Head of BBC Radio 1, says: “I am so excited for Dean and Vicky. They are both highly engaging presenters who made me laugh so much in their company.  They’re a testament to the success of our Christmas Takeover initiative and I’m thrilled it will enable them to bring a smile to the nation on daytime. It is also a very special moment for Radio 1, as it means we’ll be broadcasting from Salford seven days a week which is great.”

In other changes on the station, Katie Thistleton will host her own weekend show (Friday and Saturday, 10.30am – 1pm) which will also broadcast from Salford. Katie first joined the station in 2017 and has quickly risen up the ranks being a firm favourite amongst listeners. As well as taking on the weekend slot, she will continue to present Radio 1’s Life Hacks (Sundays, 4pm – 6pm) and The Official Chart: First Look on Radio 1 (Sundays, 6pm – 7pm) alongside co-host Vick Hope. Her first show will be on Friday 9 September.

Katie says: “This is a dream come true for me, to have my own show on the best station in the world from the best place in the world, my home city. It’s all I’ve ever wanted! I’m so happy I’ll be spending all weekend with the Radio 1 listeners and I can’t wait to bring you lots of anthems and lots of fun new features! Roll on September!”

In addition, Nat O’Leary will also join the station to host brand-new show Radio 1 00s (Sundays, 11am – 1pm). Nat was part of Radio 1’s Christmas Takeover 2021 and after trying her hand at hosting Radio 1 Anthems, took over Friday Early Breakfast in May 2022. She first started out her presenting career as host of PrettyLittleThing’s podcast ‘Behind Closed Doors’ where she has interviewed celebrity and influencer guests. Her first show will be on Sunday 11 September.

Nat says: “It really doesn’t feel real. I am so honoured to be joining the Radio 1 family and beyond excited to be bringing you a brand-new show, Radio 1 00s every, single, Sunday!! Let’s do this besties! Yayyyyy.”

Aled Haydn Jones, Head of BBC Radio 1, says: “Massive congratulations to Katie and Nat, they are both brilliant and I can’t wait to hear what they do with their new shows. September is going to be a new sound for Radio 1; with both established great broadcasters and the next generation of talented DJs, we’ll keep the nation entertained and showcase the best new music to soundtrack our audience’s day.”

Radio 1 will be announcing the new host of The Official Chart (Fridays, 4pm – 5.45pm) in the coming weeks.