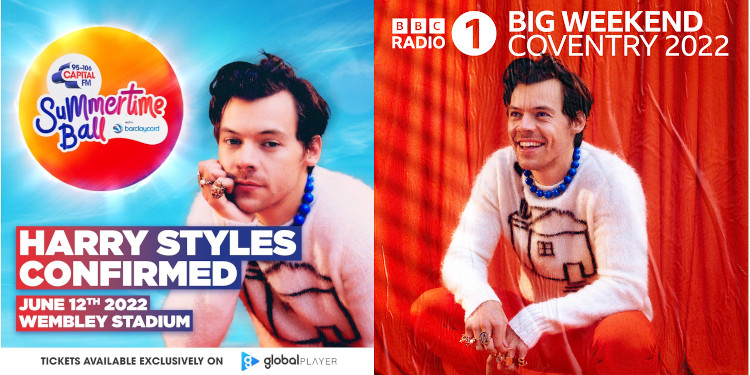 Harry Styles is set for a couple of high profile gigs over the next couple of months as he’s been confirmed to appear at Capital’s Summertime Ball and Radio 1’s Big Weekend 2022.

He was the first name revealed on Capital Breakfast this morning by Roman Kemp, Sonny Jay and Siân Welby for Capital’s Summertime Ball with Barclaycard.

Returning to London’s Wembley Stadium for the first time since the pandemic began, Capital’s Summertime Ball with Barclaycard takes place on Sunday 12 June. Other acts announced this morning were KSI, Anne-Marie, George Ezra, Becky Hill, Sigala, GAYLE, ArrDee and Eddie Benjamin. The rest of the line-up will be announced across this week on the Breakfast Show.

Harry has also been added to the line-up, headlining Radio 1’s Big Weekend 2022 in Coventry on Sunday 29 May. Pa Salieu and Rina Sawayama will also join the star-studded line-up.

Pa Salieu says: “Excited to be finally performing in my home town Coventry as part of Radio 1’s Big Weekend. I know the Coventry crowd will do our city proud and show all the other artists the energy of the Midlands.”

Rina Sawayama says: “I cannot WAIT to come and play at Radio 1’s Big Weekend for the first time!! It’s going to be such a moment.”

Radio 1’s Big Weekend 2022 will also have a Radio 1 Dance Stage, BBC Music Introducing Stage and a Radio 1 Relax tent. The festival will return to the field for the first time in two years and will be part of the BBC’s Centenary celebrations.