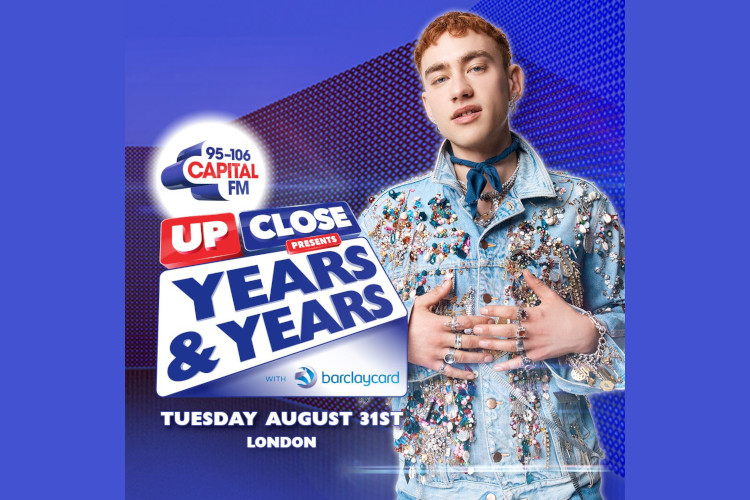 Years & Years are to play the third gig in this summer’s Capital Up Close series of live music events on Tuesday 31 August.

Capital Up Close presents Years & Years with Barclaycard will see the band play to a live audience at London’s Under the Bridge and it will also streamed live on Global Player.

This comes after Anne-Marie and Mabel previously played as part of the series.

Years & Years are known for hit songs including ‘King’, ‘Breathe’ and The Official Big Top 40 no.1 ‘Starstruck’ and have collaborated with artists including Kylie Minogue, Jax Jones and MNEK.

Olly Alexander is also renowned for playing the lead in Russell T Davies’ acclaimed drama It’s A Sin. His cover of the Pet Shop Boys’ track which inspired the show’s title – which he released with Elton John earlier this year – went straight to no.1 on The Official Big Top 40.

Tickets to the show can be won by listening to Capital and a Barclaycard prize draw offers extra chances to win online.

Olly Alexander said: “Playing to a live audience is the best feeling in the world and something I’ve missed so much!  I’m very excited Capital Up Close with Barclaycard will be my first gig back and I actually can’t wait to see my fans again! I just know I’m going to get overwhelmed and cry tears of happiness; it’s going to be an amazing night!”

Roman Kemp said: “The series of Capital Up Close gigs with Barclaycard have been phenomenal and we can’t wait for the next one with Years & Years. Olly Alexander is a huge hit with Capital listeners, and we’ve seen how much everyone has enjoyed being back at live music shows so this promises to be an epic night!”

hi friends, i am so so excited to announce i will be playing a gig on the 31st of August ? @CapitalOfficial Up Close will be my first gig back and I actually can’t wait to see my fans again! ? I just know i’m going to get overwhelmed and cry tears of happiness?? pic.twitter.com/w0BhmN5cDr