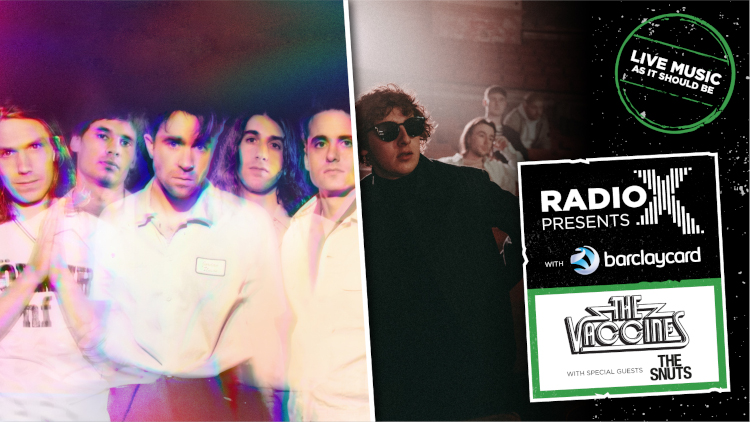 The Vaccines and special guests The Snuts will make their hugely anticipated return to performing live for fans this month in an exclusive gig for Radio X.

The bands will play to a live audience for the first time in over a year in ‘Radio X Presents The Vaccines with special guests The Snuts with Barclaycard’ at London’s O2 Forum Kentish Town on Monday 26 July.

It’s been nearly two years since UK fans last saw The Vaccines live, when they played Victorious Festival in August 2019.

One of the UK’s biggest guitar bands and best live acts, the group have just announced their brand-new album ‘Back In Love City’ which is due for release in September. They’ll be showcasing brand-new tunes and treating the audience to a few fan favourites when they take to the stage later this month in what will be a special moment for the band and fans alike.

Speaking about how much the gig means to the band, The Vaccines’ Justin Hayward-Young said: “Not only have we missed playing shows more than anything, we’ve missed each other. This will be the first time we’ve all been in the same room since December 2019 and we can’t wait to celebrate with you on the station we grew up worshipping.”

Appearing as special guests, The Snuts’ last gig in front of a live audience without restrictions was on 13th March 2020, when they celebrated the release of their Mixtape EP at King Tut’s Wah Wah Hut.

Since then, the West Lothian band have become the first group to sell out three headline shows at Glasgow’s iconic Barrowland Ballroom before releasing an album. In April this year, they became the first Scottish band in 14 years to top the UK album chart, with their record ‘W.L.’ debuting at number one.

Speaking of his excitement to play for a live crowd again, The Snuts’ Jack Cochrane said: “Bands being unable to play live for an audience over the past 18 months has been the greatest challenge indie and rock music has ever faced.

“Our music is centred around live and fan interaction – so to be finally playing at one of the first real gigs back with The Vaccines makes us happier than you can imagine! Thank you Radio X for making this possible, it’ll be one to remember!”

Radio X’s Toby Tarrant will host the gig, which will also feature a DJ set from Radio X’s Dan O’Connell.

Tickets for the exclusive gig go on sale this Friday 16 July at 9am, with an exclusive pre-sale for Radio X Access All Areas members and Barclaycard customers on Wednesday 14 July.

Highlights from the show plus interviews with the artists will be available on Global Player and across Radio X’s social platforms, from Sunday 1 August.