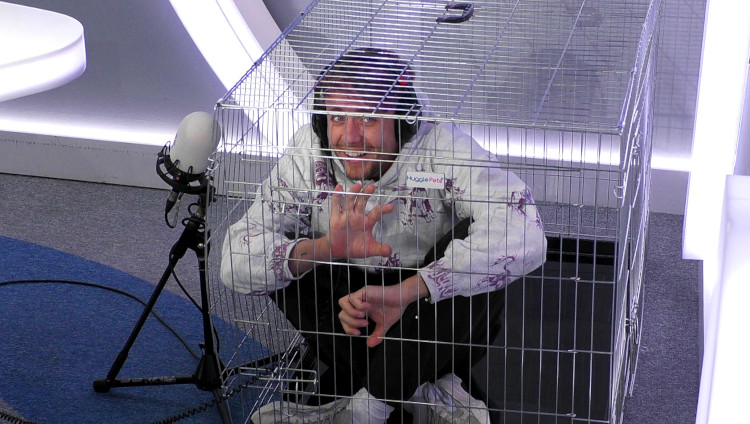 Roman Kemp was joined by his I’m A Celebrity… Get Me Out of Here! 2019 campmate James Haskell on Capital Breakfast this morning (5 October) and ended up having to present part of the show from a dog cage as James failed a Bushtucker Trial inspired challenge to free him.

The pair were talking about this year’s I’m a Celebrity being in Wales and Roman asked if James thought it would be the toughest yet?

“So, no doubt they’ve imported in some horrific creatures. We were too friendly, you know, we were best of friends as ever we were. This time they’re going to put some absolute social hand grenades in. There will probably be 18 of me in there, just rowing at all times!”

Warning to all #ImACeleb 2020 contestants: @jameshaskell knows that this year's show will be even harder than usual. ??? pic.twitter.com/9mkGgWPQRI

Staying with the Welsh theme, James then took on a Welsh language challenge where he had to guess the meaning of some Welsh words.

In homage to I’m A Celeb’s Bushtucker Trials, Roman was locked up in a cage while James tried to complete the challenge, and was forced to present part of his Capital Breakfast show from the cage as James kept getting answers wrong.

As James kept guessing wrongly, Roman tried to steer his former campmate in the right direction, yelling into a microphone set up outside the cage: “James! It’s got an ‘I’m A Celeb’ theme you idiot!”

James then told Roman: “I’d like to pretend that I care about getting you out of that cage but, frankly, I don’t!”

What do you get when you put @jameshaskell, the Welsh language, @romankemp and a small dog cage together? ???????? pic.twitter.com/wlP5EusIow

Tune into Capital Breakfast with Roman Kemp, weekdays from 6am – 10am across the UK.