Magic at the Musicals set to return 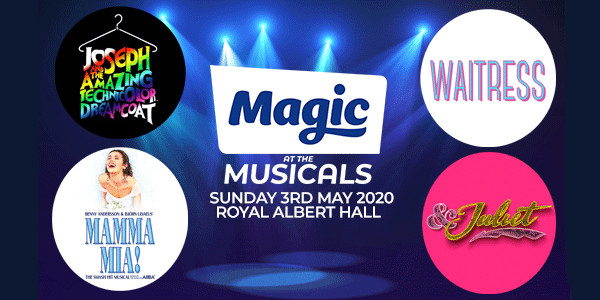 Ronan Keating & Harriet Scott announced on Magic Radio Breakfast this morning (Thursday 27 February), that tickets are now on sale for Magic at the Musicals.

The event is set to return to London’s Royal Albert Hall on Sunday 3 May. Celebrating the best of the West End and beyond, the show will feature performances from leading stage stars accompanied by a 60-piece orchestra.

There’s a new line-up of leading cast member performers from West End shows for the concert, including & Juliet, Lucie Jones performing with Waitress, Jac Yarrow performing with Joseph and the Amazing Technicolor Dreamcoat, MAMMA MIA! The Musical, plus there’s more performances to be announced.

Speaking about the concert, Magic Radio Breakfast hosts Ronan and Harriet said: “Now in its fifth year, Magic at the Musicals has become the stand-out calendar event for audiences to enjoy an array of incredible West End talent under one roof.  Prepare to be blown away by some stunning performances, you won’t want to miss it!”

Further announcements about the concert will be made on Magic Radio and the recently launched digital radio station, Magic at the Musicals.

Global’s Make Some Noise Emergency Appeal raises £1.7m for those hit by coronavirus