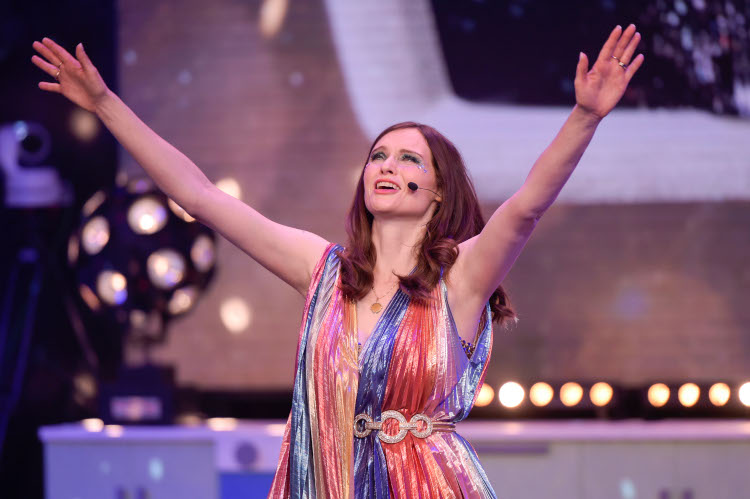 This morning at 9.30am, Sophie Ellis-Bextor finished her 24 hour Kitchen Disco Danceathon – the challenge set by BBC Radio 2 set for this year’s BBC Children in Need.

As Sophie completed the task, donations continued to pour in, with the current total at £1,009,317 and still going up!

There were also messages of support on social media from the likes of Elton John, Ed Sheeran, Louise Redknapp, Owain Wyn Evans, Deborah Meaden… and many more. The full Danceathon was broadcast live on red button and BBC iPlayer with regular updates on Radio 2.

In the final 10 minutes, Sophie was joined by her mum Janet Ellis, husband Richard Jones and her five children – her youngest cuddling a big Pudsey bear – who danced through to the end with her and which brought her to tears of joy to Sophie to be surrounded by her family. As Sophie neared the end, she sang her songs, Take Me Home and Murder on the Dancefloor as Richard accompanied her on Millennium Falcon shaped bass guitar, ending appropriately with ABBA’s Dancing Queen.

Speaking live to Zoe Ball on the Radio 2 Breakfast Show as she finished in a sparkling rainbow dress, Sophie said: “What a team, thank you so much. I’ve been so well supported.”

Kneeling on the stage, hugging her children and crying and laughing, she continued: “This has been extraordinary. I always thought this would be an privilege to have done and I’ve never done anything like this so I want to thank everybody for giving me the opportunity and I’ve been weepy solidly for the last hour this has been really special and thank you to everybody who donated and everybody who gave me energy and support and messages, it’s got me through.”

Zoe said: “Sophie honestly, thank you so much to all the team from Children in Need and the BBC who’ve supported Sophie. Thank you Professor Greg White as well, thank you to your Richard… he’s been so, I mean gosh, what an amazing marriage you to have, you’re amazing, your kids – she’s got to be a mum again now!”

She continued: “You are an incredible lady Sophie, we love you so much. We’re going to dance for you now because we think you deserve a nice glass of champagne or a cup of tea and a sit down… Thank you Sophie, you’re amazing.”

Sophie replied: “It’s been an honour and actually really fun, except for the bits that weren’t fun.”

Zoe then told Sophie that she didn’t have to dance anymore, to which she replied: “It’s been really amazing and actually quite fun!”

Helen Thomas, Head of Radio 2 said: “All of us at Radio 2 would like to say the hugest thank you to Sophie Ellis-Bextor for agreeing to undertake and now completing an incredible 24 hours Kitchen Disco Danceathon, raising a total so far of £1,009,317 for BBC Children In Need. Thank you to all the wonderful Radio 2 listeners who have donated and all those who joined at any point in the Danceathon to support and motivate Sophie along the way. We are all in awe of her accomplishment!”