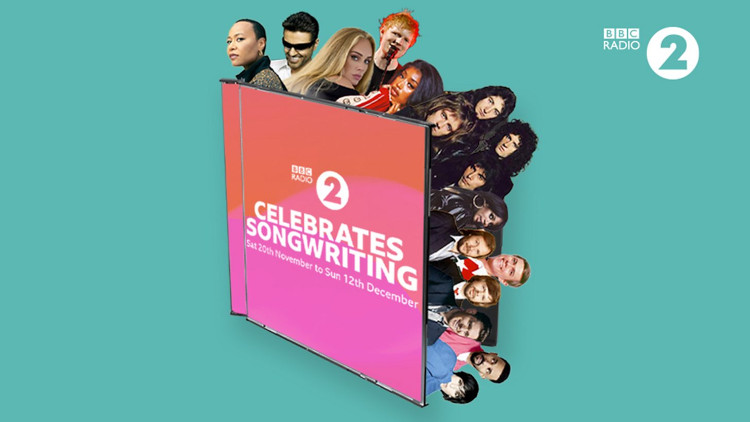 BBC Radio 2 Celebrates Songwriting is a series programmes that will explore the art and craft of the world’s songwriters.

Running from Saturday 20 November to Sunday 12 December, each programme will hear from some of the most famous names and their well-known fans to discover how their extraordinary skills with words and music connects with people and makes them feel.

The season launches with Adele At The BBC, looking back at her history with Radio 2. This is followed by a series of specials with Ed Sheeran, Cerys Matthews, Gary Barlow, Emeli Sandé, John Legend, Craig David and many more.

Ed Sheeran, presenter of Nashville Songwriters, says: “As part of Radio 2 Celebrates Songwriting, I’m happy to introduce this special programme on the music of Nashville. It’s the best song town on the planet and I’ve spent a lot of time there myself, with friends like Taylor Swift, Kelsea Ballerini and Brett Eldredge. I hope it’ll give you an idea of exactly what it takes to be a successful songwriter in Nashville!”

Cerys Matthews, presenter of First And Last, says: “’I can’t wait to explore the journeys our songwriting guests have been on – from their first ever song, right up to their last. Join me as I discover the twists and turns, the highs and lows, and lessons learnt along the way.”

Gary Barlow, presenter of We Write The Songs, says: “I thoroughly enjoyed hearing these fantastic musicians share insights into their songwriting processes and how they crafted some of the biggest songs ever. As a songwriter, you’re constantly looking for inspiration and who better to hear from than the likes of Sir Paul McCartney, Sam Smith, Max Martin, Paloma Faith and more. I hope people enjoy listening to this series on BBC Sounds.”

Helen Thomas, Head of Radio 2, says: “Fabulous music is played on Radio 2 from start to finish every day, so Radio 2 Celebrates Songwriting is our way to pay tribute to the incredible talents and skills of those who start with an empty sheet of paper – the people who help make our station sound so brilliant, superb songwriters from the UK and across the world!”

There will be a focus on the music of George Michael which will be broadcast early in the New Year, with further details to be announced soon.

Adele at the BBC

Zoe Ball introduces a special programme looking back at Adele’s history with Radio 2, including her very first appearance on the network, her first national radio studio session and radio concert, plus Zoe’s own recent exclusive conversation with the singer on The Breakfast Show. Songs include Make You Feel My Love, Chasing Pavements, Crazy For You and Right As Rain.

Tracks Of My Years: Songwriters Special

On BBC Sounds from Saturday 20 November.

Ken Bruce presents a songwriters’ special featuring some of the composers and lyricists who have appeared as guests on Tracks Of My Years, a feature of his show each day from Monday to Friday. The programme includes established giants of the music industry such as Diane Warren, Richard Carpenter, Smokey Robinson, Brian and Eddie Holland and Jimmy Webb who will feature alongside today’s generation of writers including Ryan Tedder, Ed Sheeran, Amy Wadge, John Legend and Becky Hill.

We Write The Songs Podcasts

On BBC Sounds from Saturday 20 November.

Another chance to hear Gary Barlow talking to some of the world’s best songwriters for this series. Each episode features an artist talking about some of their biggest hits and the personal stories behind them. In the series’ Gary talks to Sam Smith, John Legend, Barry Gibb, Sir Paul McCartney, Jeff Lynne, Barry Manilow, Paloma Faith, Sheryl Crow and Max Martin, plus there’s a fascinating chat between Gary and his former Take That band mate, Robbie Williams.

For this one hour special, Michael chats to one of his all-time musical heroes, Richard Carpenter. Michael has selected his five favourite Carpenters recordings and will ask Richard the story behind them, from one recording artist to another. This promises to be an intimate chat as Michael shares his experiences of how The Carpenters’ songs have influenced his life and his own musical career, and delves into the finer details of these timeless tunes. And Michael’s dream comes true as he asks Richard to accompany him on piano as he sings the songs, guided by the writer himself.

Michael says: “The music of The Carpenters is like a lifelong friend: it has been a hug when I’ve needed to shed a tear or felt alone, it’s made me smile no matter what bad news is going in on the world, made me feel good about being alive and filled me with optimism, hope and inspiration. You are never alone when you have The Carpenters’ music playing. I cannot wait to chat to Richard and ask him what inspired the songs, where did the lyrics come from and what does it mean to him that his songwriting means so much to millions of people all over the world…myself being one of them.”

It’s A Kind Of Magic: The Queen Story

It’s a Kind of Magic is a spectacular demonstration of the incredible songwriting of one of the world’s greatest rock bands, Queen, and the legends who inspired them, including Jimi Hendrix, Led Zeppelin, Aretha Franklin and more. Hosted by Radio 2’s Gary Davies and recorded at the outdoor venue of The Granaries in Malta earlier this year, the whole of the legendary Queen Live Aid set from 1985 at Wembley Stadium is recreated on what would have been Freddie Mercury’s 75th birthday and the 50th anniversary of Queen. The 60-piece BBC Concert Orchestra and rock band are joined by Tony Vincent and the star of the hit Queen musical We Will Rock You, along with other leading vocalists. The singers and orchestra perform hits including Killer Queen, Somebody to Love, Don’t Stop Me Now, Under Pressure, We Are the Champions and Bohemian Rhapsody, in celebration of Queen’s music.

In an exclusive interview, John Legend talks about the influence that John Lennon, Paul McCartney and George Harrison have had on his music, from learning to play Yesterday at the age of eight to the way that they shaped his songwriting and methods of working in the studio. In between he picks his own favourite Beatles’ songs, discusses the songwriting of Lennon, McCartney and Harrison at length, gives listeners a unique insight into his own songwriting and picks the one song that he believes encapsulates John Legend more than any other! John’s Beatles picks include Something, Blackbird, Yesterday, Eleanor Rigby, Come Together, Across The Universe, Golden Slumbers, Hey Jude, Here Comes The Sun.

Singer songwriter Michael Bublé joins Claudia on her Saturday morning show to discuss the perfect ingredients for a festive hit and his role as the unofficial king of Christmas!

How To Write A Perfect…

Pete Paphides is on a mission to find the perfect formula for making a bona fide hit by talking to the people who make them – the songwriters. He takes a close look at superhits from four genres: Power Ballads, Girl Power Anthems, Dancefloor Fillers and Break-up Tracks. Just what makes them tick? Pete will be asking some of songwriting’s finest including Shaznay Lewis, Sharleen Spiteri, Kamille, Sophie Ellis-Bextor, Melanie C, Katie Melua, Martin Fry, Kevin Saunderson (Inner City) and Dallas Austin (who co-wrote TLC’s Unpretty). He’ll hear the stories behind their hits, find out how their famous lyrics were written, and delve into their writing process. He’ll be asking if they knew they had a hit on their hands, and do they still love the song after all this time? And, ultimately, can Pete himself create the blueprint for a perfect hit? The programmes will be available as four thirty-minute shows on BBC Sounds.

Ed Sheeran – a long-time fan and supporter of country music – introduces this special look at the work of Music City songwriters. Nashville is the country songwriting capital, home to thousands of the globe’s most successful commercial songwriters and the ‘must visit’ destination for countless more wanting their own work sprinkled with some of the city’s fairy dust. Nashville is a song factory, utilising an almost industrial level of organisation to ensure that hits are generated on a daily basis every day of the year.

Songwriters work around the clock to get the job done…famously, in one Nashville session, Dolly Parton wrote Jolene and I Will Always Love You on the same afternoon – the products of a Nashville writing session. But it’s not just country music – all genres are covered by Nashville-based songwriters and collaborators, from Bebe Rexha and Nelly to Peter Frampton, Taylor Swift and Lana Del Ray. This hour long programme introduces listeners to that world, showing how the machine works, talking to songwriters and artists to uncover the secrets of the only hit factory in the world that is a whole town. Listeners will eavesdrop on an actual writing session to hear a potential hit come together from first note to last.

Tracks Of My Tears with Edith Bowman

This two-part series gives a fascinating insight into the lives, hearts and minds of some of today’s most successful songwriters through the first and last songs they wrote and the journey in between. In each programme, Cerys Matthews meets two well-known artists (one male, one female) and explores their songwriting journeys. From their first song to their most recent, Cerys finds out how they got from one to the other and what they’ve learnt along the way. She hears about their creative process, the highs and lows, their inspirations and influences, and what all this has taught them about themselves and the world around them, including how have they changed as a person, and as a songwriter since that very first song. And what does their last song say about them? Guests include Emeli Sandé, Suzanne Vega, Craig David and Guy Garvey.

As part of Radio 2 Celebrates Songwriting, Sir Michael Parkinson presents a special Sunday Night is Music Night celebrating the life and career of composer Leslie Bricusse, who died in October. The concert was originally recorded to celebrate Leslie’s 80th birthday. As a composer and lyricist, and with Anthony Newley, John Barry and John Williams, Leslie wrote an astonishing catalogue of songs. These include Goldfinger, Feeling Good, You Only Live Twice, Pure Imagination, If I Ruled The World, Can You Read My Mind from Superman. There’s also The Candy Man, My Kind Of Girl for Matt Monro, and the groundbreaking musicals Stop The World I Want To Get Off, and The Roar of The Greasepaint The Smell of The Crowd. Mike Dixon conducts the BBC Concert Orchestra, with star singers from the West End including Emmy award-winning Hannah Waddingham, John Owen-Jones, and Michael Jibson, as well as the 40-strong Finchley Children’s Music Group and Annie Skates’ Capital Voices. The show was first broadcast in 2011.