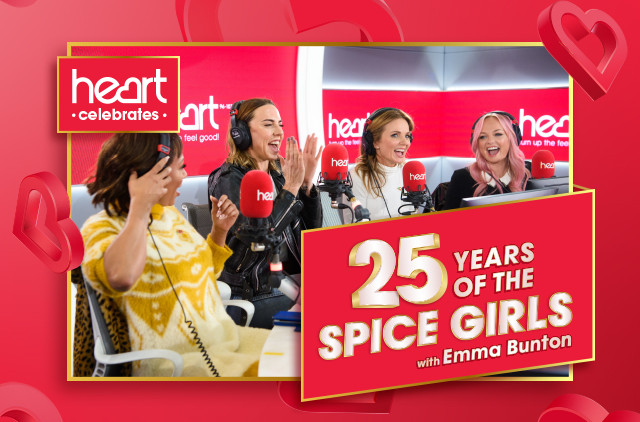 Last night, Emma Bunton hosted a special celebration of the Spice Girls’ 25th anniversary on her Sunday night Heart show, reminiscing about meeting the other girls for the first time and talked about the band’s future.

The nostalgia-filled show featured memories and anecdotes from some of Emma’s fellow Spice Girls as well as celeb fans of the group to mark 25 years since the release of ‘Wannabe’.

Emma said that the experience changed her, and the other girls lives forever. Describing the first time they met, Emma recalled: “I still remember seeing the other girls for the very first time at a train station. They looked exactly how you would expect – Geri with her red hair, Mel C with her tracksuit on, Victoria with her little black dress – and the Spice Girls, of course, were born.”

Mel C and Geri Horner popped up on the show with Mel requesting ‘Say You’ll be There’ and Geri asking to hear ‘Wannabe’.

Talking about their ‘Girl Power’ and its importance, Emma said: “We’re so proud of it, but even more so now hearing some of the other girl bands which are around at the moment being inspired by us, it’s just amazing.

“The Little Mix ladies, earlier this year they won a BRIT and in their acceptance speech, they thanked the Spice Girls. It was so lovely. Thank you, thank you.”

Perri Edwards from Little Mix admitted that she cried when she met all five Spice Girls at the Olympics. She’d previously met Emma and the two Mel’s, but not Geri and Posh, so it was really something for her when she saw all of them holding hands, walking down the corridor, “They were so loud and energetic. That was one of the best moments ever,” she said.

Heart Evening Show host Mark Wright, who is a big fan, spoke of the time he dressed as Sporty Spice when his sister and her friends dressed as the band but were one member short. Mark came to the rescue, he revealed: “Yes, I was Sporty. Put me trainers on, I was kicking away, absolutely loved it!”

There was also a response to what Beyonce has recently said about being inspired by the Spice Girls and that it was them that made her want to do what she does, making her proud to be who she is. Emma said: “I know myself and the other girls are so honoured that you said that. We have met a few times and it was just wonderful, so hello Beyonce and thank you so much.”

So, 25 years on, might we see the girls back together? Although there wasn’t a direct answer, there may have been a hint when Emma said: “Who knows, you could see us all together again at some point, hmm? I’m definitely up for that!

“Thank you so much for spending tonight with me as we celebrated 25 years of the Spice Girls and thank you for being there with me and the rest of the girls for all of this time. We really, really appreciate it and send you so much love. Girl power,” she added!

Big love to @littlemix, @thewhitmore and SO MANY OF YOU for your @spicegirls memories! 25 years is incredible. ❤️

Keep sending them over to @emmabunton, we can never have ✨too much✨ ? ✌️ ☮️ pic.twitter.com/YYF8ebm8vc