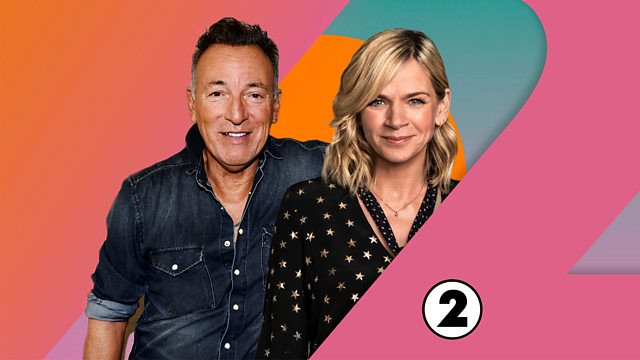 Bruce Springsteen was a guest on the Zoe Ball Breakfast Show on Radio 2 earlier, where they talked about the first time he heard one of his songs on the radio, his podcast with Barak Obama and his next plans.

Recalling the first time he heard one of his songs on the radio, Bruce told Zoe that he was standing on a street corner in Connecticut when a car pulled up with the window down and he could hear Spirit of the Night coming out of the car radio. “I wanted to run over to his car and say ‘Hey, that’s me!’, but I didn’t do it. I just stood there in shock and ecstasy,” he admitted.

Bruce and Barack Obama have been friends for a while and it was initially Obama’s idea to record a podcast series together, but Bruce wasn’t sure about it.

“I thought ‘Wait a minute, you’re the President, I’m a New Jersey high school diploma guitar player – are you sure this is a good idea?’,” he explained.

The pair had talked about a variety of things in long conversations they’d had in the past and Obama said that was the type of show he’d like to do with Bruce. “Something that was more broad and philosophical and historical and based in people who’ve… examined their lives in some depth and so that’s what we had in common and the basis that we started the podcast on,” Bruce said, “And he came to my farm and we sat in my studio and days would go by and we’d just talk,” he added.

Zoe wanted to know about Bruce’s next plans – he told her: “I’ll be doing a few more radio shows, we’ll be touring next year if everything goes well. The E Street Band will be back on the road, you know depending of course on the virus and what’s opening up.”

Bruce also took time to acknowledge his UK fans by saying: “I’d like to take one moment to thank my UK fans, particularly for the support they’ve continued to give to my new music. Letter To You was so well received in the UK and it really touched by heart and I deeply deeply appreciate it.”

You can hear an extended Zoe Meets Bruce on BBC Sounds now, and there’s four new episodes from Bruce Springsteen’s series, From My Home To Yours, which will also be on Radio 2 from this Friday at midnight-1am.