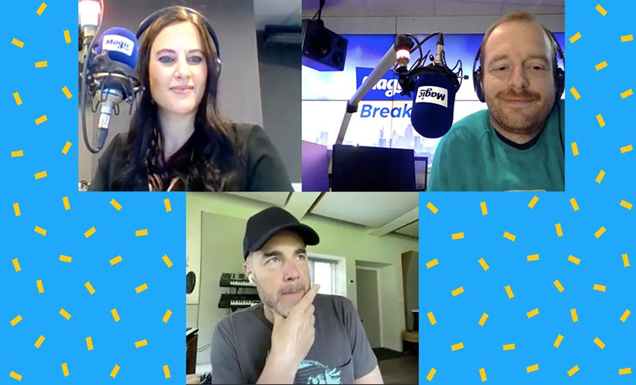 Gary Barlow joined Kat Shoob and Tom Price, on Magic Radio Breakfast this morning, who were sitting in for Ronan and Harriet, and admitted that he felt very anxious about returning to work after lockdown.

Chatting about his new show ‘I’m With The Band’ he revealed that he didn’t sleep at all in the week leading up to the filming, saying: “I felt very anxious as I had to turn up at a time and do something. And people were going to be looking at me, going come on then let’s do it.”

Thankfully for Gary, his new band mates for the show Jamie Cullum, Mica Paris, James Bay and Tom Fletcher of McFly all felt the same way as well.

Gary continued: “To have to be somewhere on time, to actually have to get in a car it was a very weird thing, and it obviously is something that has been very natural to us through our lives, but it did definitely feel strange. I’m as desperate as anyone else to get back to normality because that’s not right. We should be able to turn up at things and feel fine.”

Although Gary’s new TV special, which airs on Friday, 4 June at 10:45PM on BBC One see’s him join up with other musicians to form a new band for one night, when asked by Kat & Tom which other band he would like to have been part of Coldplay came out on top.

“I always feel lucky that we are not one of those bands that fight all the time,” Gary said, “and you hear that a lot, that a lot of bands don’t like each other and we’ve always got on great and I’ve always felt blessed for that and it always appears to me that Coldplay are a very happy band, they like being together, so I’d love to nudge Chris to one side and sing a bit of Viva la Vida you know.”

When asked about the rumoured Vegas residency, Gary gave Take That fans something to look forward to by saying: “When it is safe we will be exploring that avenue for sure!”

Listen to Magic Radio Breakfast every weekday morning from 6am-10am