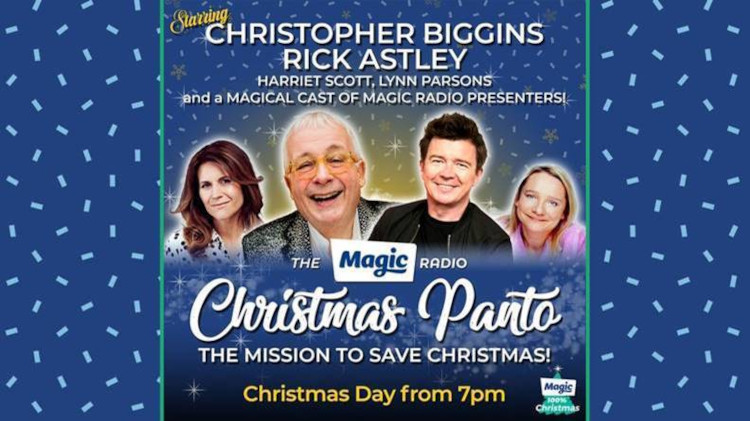 Following the closure and cancellation of many Pantomimes across the country this Christmas due to Covid-19, Magic Radio is holding its own on Christmas Day at 7pm starring Christopher Biggins and Rick Astley.

Panto legend Christopher Biggins will be leading the show as the ‘Good Fairy’, with a cameo from Rick Astley! Magic Radio hosts including Lynn Parsons and Harriet Scott will also be taking part.

Christopher Biggins told Magic Radio’s Tom Price about his excitement for the show when asked if this was his biggest Panto to date, Biggins replied: “Oh without a doubt! The excitement when you first approached me was palpable, I couldn’t believe my luck. Just wonderful because I know most of your audience are pantomime people!”

Explaining why people love Pantos so much, he said: “The whole thing is to do with family, family is the most important thing. It appeals to everybody, from a baby right up to an 80 or 90-year-old and everybody in between. It’s a family occasion. Families go out for a good laugh, to be entertained and enjoy themselves.”

You can listen in to hear how the team take on a mission to rescue Magic 100% Christmas from the spell cast by ‘evil fairy’ played by Lynn Parsons. Can Magic Radio be saved?!

Magic Radio has turned 100% Christmas this year by playing non-stop Christmas hits. The radio station will be playing the seasonal songs until the 27 December.

🔔 HUGE FESTIVE NEWS! 🔔 On Christmas Day from 7pm, we proudly present the Christmas Panto with @goldchannel! Starring the legendary Christopher Biggins @onebiggins, the wonderful @rickastley and a magical cast of our presenters, join us for thrills, spills and laughs a-plenty!✨ pic.twitter.com/oSyFJQy2N3