Benedict Cumberbatch tells Magic Radio about getting into shape in lockdown 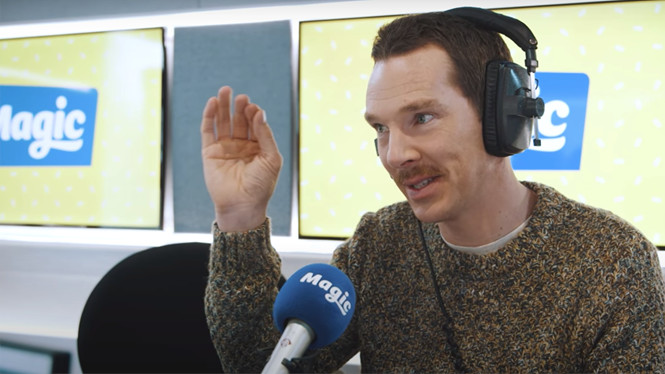 Benedict Cumberbatch joined Magic Radio for Prince’s Trust Day today (Thursday 15 October), a special day helping to raise awareness of the issues young people are currently facing, and asking listeners to be the turning point by donating to The Prince’s Trust.

Speaking to Emma B on her show, Benedict shared how he has been enjoying spending time with his family over lockdown, “It was an absolute delight to be ensconced with them in nature and nurture. That was a great blessing for me. I’m very aware that’s a very fortunate position to be in,” he said.

The actor also shared that he doesn’t buy into the stereotype that Brits have put on weight and been lazy over this period, he told Emma: “I don’t know about that generalisation. I think a lot of people have really hit the pavement with their shoes or gone on a bicycle or gone on walks and been outside in nature. You had Spring here when it hit, and I think lot of people took their health very seriously for obvious reasons but also the opportunity to exercise.”

Benedict shared his own experience of getting fit in lockdown, “I did train,” he said and added, “I was working out for a job so it was very structured as well. Just super easy, just a walk in the park when you have someone telling you what to do, it’s remarkably easy. Self-motivation is by far the hardest thing to overcome I think when it comes to any kind of exercise really.”

The star, who is due to again take on the role of Doctor Strange on the big screen, spoke about why it bugs him when people call his distinct Cloak of Levitation, a cape, “Of course it’s a bloody cloak. Everyone keeps on calling it a cape. I had it on the other day. It is such an amazing creation. Alex our costume designer on the first film made it, and she’s just extraordinary. It is so detailed and textured and rich. It really does feel sort of alive the way that it is in the film. It’s heavy. It’s a cloak, it’s definitely a cloak,” he said.

He also shared that he hasn’t yet taken the cloak home, but thinks he may regret it, he explained, “Actors often talk about what they’ve taken. I’ve been really pathetic about that. I think I might.. I mean I’m sure there are bigger regrets I’ll have when it comes to me hanging up said cloak. But I think I might regret not having stolen more. “

For more information on the campaign or to donate, visit princes-trust.org.uk/turningpoint