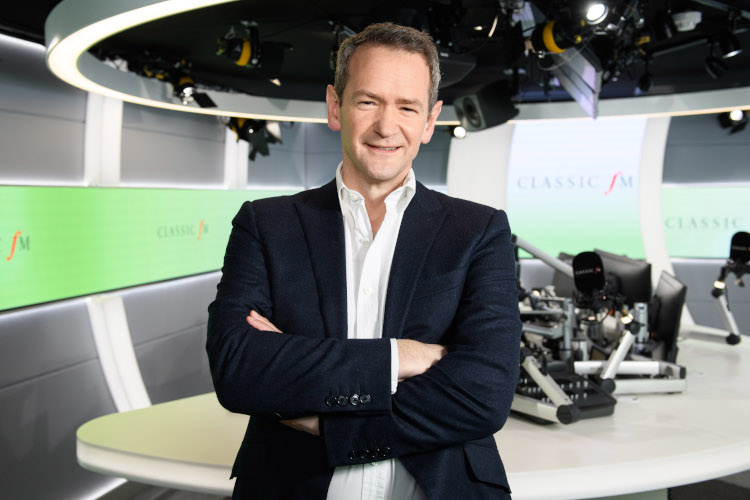 The three-hour show which begins at 9am will include music from the all-time greats such as Mozart, Beethoven and Bach to contemporary composers including Ludovico Einaudi, Philip Glass, Rachel Portman and film music writer John Williams.

Alexander will become the fourth presenter of the weekday show in the station’s 28-year history. He joined the permanent line-up on Classic FM in 2014 and has been presenting his own weekend afternoon shows (Saturday and Sunday, 1pm to 3pm).  He’ll continue to host his Saturday programme in the same time slot, in addition to his popular TV quiz show, Pointless.

Alexander Armstrong said: “I think this is the most wonderful job in all radio. To be appointed John Suchet’s successor is a tremendous honour – that is a substantial pair of shoes I shall be stepping into, and I hope I can show myself worthy of them.

“Music has been the abiding force in my life from as far back as my memory stretches, and to be able to share that love with a new daily audience on Classic FM is about as perfect as life gets.”

It’s incredibly exciting to announce that I will be taking over as the host of Classic FM’s flagship weekday show, taking over from John Suchet as he launches his new evening concert programme. Do join me on Classic FM at 9am every weekday, starting from Monday 1 June

After 10 years presenting the morning show, John Suchet is moving to evenings to host a new weekday concert programme, Monday to Friday from 8pm – 10pm.

The Classic FM Concert with John Suchet will feature the best recordings of orchestras, choirs and soloists from across the UK and around the world. The new show will be in addition to John’s current year-long Saturday night series (9pm to 10pm) – Beethoven: The Man Revealed.

John Suchet said: “It has been a pleasure and privilege sharing weekday mornings with our listeners for almost 10 years, but it is time for something different for me.

“I wish Alexander Armstrong, the new voice of mornings on the station, all the best as he picks up the baton from me.

“From Monday, I will be indulging in my passion for classical music with a new weekday evening programme, The Classic FM Concert with John Suchet. It will be full of the finest pieces of classical music, as well as the stories behind the composers and I can’t wait to bring these great musicians to life for our listeners.”

Just heard @johnsuchet1 tell us he’s hanging up his mid-morning @ClassicFM baton. It’s been great to work alongside him over the past four years. Good luck with the new show!