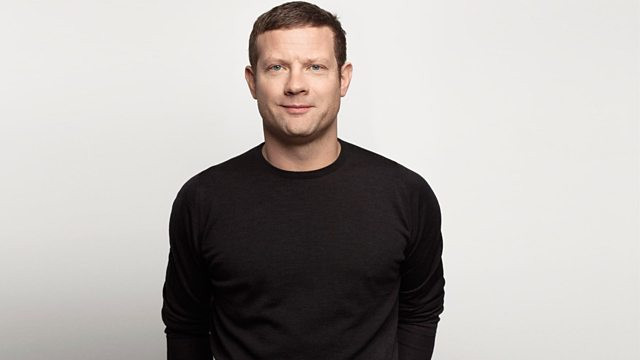 Dermot O’Leary had a packed breakfast show this morning (Friday) as he was sitting in for Zoe Ball on BBC Radio 2, with Harry Styles, Matt Lucas and Ant and Dec all making an appearance.

Harry Styles explained that he’s on day 17 of lockdown in LA with friends after being due to fly home a couple of weeks ago but wasn’t able to because of the flight situation.

He says that he’s trying to have a routine, getting up, doing exercise and then some writing and recording, plus a little bit of reading.

Because he has a strict routine when touring, Harry isn’t finding his restrictions too difficult, he says: “Rather than feel locked inside and stuff, I’m trying to lean into more of the like, oh, I get up at this time and then I do this at this time.”

He also revealed he’s speaking to his mum every day: “Me, her and my sister get on like a big group, FaceTime and so I check in with my family in the morning and then it’s been quite nice actually. I’ve probably been speaking to them more than I usually do.”

Matt Lucas was on the show to talk about the project feed the NHS that he’s been working on and his baked potato song. He told Dermot: “I wrote the lyrics to this baked potato song just in an idle moment thinking ‘well I’ll just put it on twitter, I don’t think anything will happen with that.’ And I was a bit wrong!

“Probably the only creative thing I’ve done in the last few weeks was rewrite four lines of an old song but it went a bit viral, and yeah loads of kids are recording their own versions of it and so we’ve decided to actually release it as a single to raise money to feed NHS. So it’s out today.”

When it was Ant and Dec’s turn to be on the show, Dec was on the line but there was no Ant! Dec admitted: “We can’t get Ant. I don’t know where he is.  You’re not telepathic, you’re not your brother’s keeper.  I think it’s technical. We’re all getting used to Zoom and WhatsApp call and video calling. We don’t know what we’re doing!”

Dermot asked Ant about doing Saturday Night Takeaway from their living rooms at home. Dec revealed that it’s all done by mobile phone, he said: “There are all these technical people on the end of a video conferencing line and they’re talking you through it, so really, it’s all down on you.

Ant finally came on the line and Dermot joked: “Here he is, has he rolled out of bed now?” Ant came straight back, saying: “What are you on about Dermot. I’ve been sat here waiting for you!”

Dermot quickly asked Ant how he found doing the show from his front room?

Ant replied: “Well I’ve just been listening to Dec on Radio 2 while I was trying to get on the line and it’s true, it looks kind of dead easy and like you’re just going back and forwards but it’s not, there’s a lot more that goes into it than that.”

He also admitted that he tried to choose the best part of his house, the best corner to show off: “You don’t want to show too much off but you want to say, you know, I want it to look good on the telly. It’s been great and we’re given the chance to still broadcast and be on air, and it’s a privilege.”

Dec said that because the show relies on the audience and they both feed off the audience, so going live without them was pretty nerve wracking and they couldn’t really rely on the crew to laugh at their jokes because they’d heard them in rehearsal, they had heard them in the dress run. Ant quipped: “We’ve been doing it 30 years we just recycle old ones!”

Tomorrow night is the last in the series and Dermot asked what we can expect?

Dec answered: “Well again we’ll be coming from our living rooms and looking back at some of the best moments from the last kind of 16 years.

“We’ve got a classic audience surprise, we’ve got our undercover hit on James Corden in LA. But our piece de resistance this Saturday is…” Ant jumped in, saying: “I’m A Celebrity, Get Out Of My ear, with you!”

Dermot explained: “So essentially, the guys took me to a massive Tesco’s that’s open for 24 hours. I was walking around the fresh food department and I had to do whatever they told me to do.

“So it would be literally going “see that woman’s bag there – go and nick something out of it and put it in your bag.”

Ant added: “And the end of it you walked back where we were sat, where we sit with our monitors and our ear phones giving you instructions, and you pulled back the curtain and you just went – you two are horrible!”

Dermot said: “You’re the worst Ant, you always pushed it a bit too far definitely,” and to be fair, Ant apologised!

The pair also told Dermot they have a book coming out soon, Dec said: “It’s out in September.   We’re celebrating 30 years together so it’s a look back at the 30 years and all the shows we’ve worked on and all the backstage stories and loads of pictures.

“So it’s a really lovely thing to do for us to sit back you because you never look back, you’re always looking forward so it’s a real opportunity to look back.”