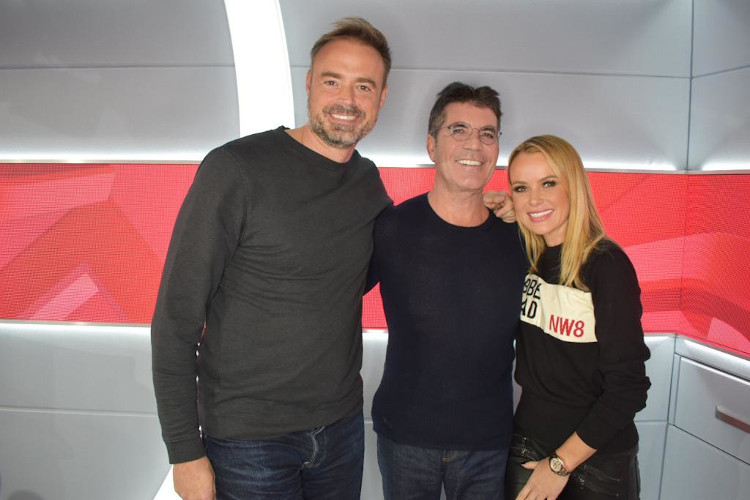 Simon Cowell appeared on Heart Breakfast with Jamie Theakston and Amanda Holden this morning and he told Amanda: “This is the perfect job for you.”

She responded: “Are you saying I’ve got a face for radio?”

Admitting it was very surreal sitting next to Amanda doing her own radio show, Simon answered: “No, because you love talking and this is all about talking.”

Amanda agreed that she never stops talking and that she thinks it irritates Simon. He denied it, saying: “No we can edit you out of that show,” referring to Britain’s Got Talent, but added: “It’s a bit difficult on this one.”

During the conversation Simon explained that he cancelled the All Stars version of X Factor this year because he’s brought forward X Factor Groups, which he’d already launched in America a few years ago. Little Mix are due to do a similar show next year and Simon didn’t want to follow it.

Ha said: “It wasn’t like some grudge against Little Mix or whatever because you know I owe those girls a lot you know.

“Even though we gave them a launch pad, they sold a lot of records. I thought their idea was a great idea. Sometimes you wanna be the first one to do it in a certain country.”

Simon also revealed that the original version of X Factor will return at some point and as far as BGT is concerned, he teased: “We’re going to make an announcement on that very shortly, which actually is going to be very very very good news.”

.@SimonCowell clears up ‘grudge against @LittleMix’ rumours and explains why he wants to launch @TheXFactor: The Band before #LittleMix's show ?