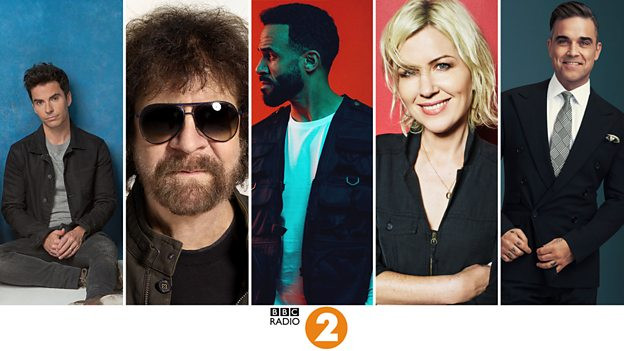 BBC Radio 2 has revealed a star-studded line-up for this year’s In Concert series which will be broadcast live on the station.

The five concerts will kick off with Stereophonics (Friday 1 Nov, 8pm).  This will be followed by Jeff Lynne’s ELO (Thursday 7 Nov, 7pm), Craig David (Thursday 14 Nov, 7pm), Robbie Williams (Friday 29 November, 8pm) all from the BBC Radio Theatre in London.

Dido will perform the final concert of the series (Monday 9 December, 7pm), from Maida Vale studios.

In addition to being broadcast on Radio 2, the concerts will be available as in vision via the BBC Red Button. They will also be broadcast on BBC television at a later date, plus they’ll be available on BBC iPlayer for thirty days after transmission.

Ahead of each artist’s evening In Concert, Radio 2 listeners will be treated to special sound check tracks in Ken Bruce’s show as well as a post-show interview with the artist that evening.

Jo Whiley will present the performances from Jeff Lynne’s ELO, Craig David and Dido. Stereophonics and Robbie Williams’ performances will be presented by Fearne Cotton.

Jeff Lynne’s ELO ranks among the most popular acts of its era, with more than 50 million albums sold, including four consecutive Top 10 albums and seven reaching the Top 20, as well as a string of many hit singles.

Jeff Lynne says: “I’m looking forward to playing for everyone at Radio 2 In Concert. I can’t wait to share songs from the new album From Out of Nowhere and lots of other favourites.”

Ivor Novello and MOBO Award winning artist Craig David has achieved 23 UK Top 40 singles, nine UK Top 40 albums and over five billion streams worldwide throughout his career. He says: “I’m excited to be part of In Concert for Radio 2. I love performing and live for moments like this, where I can connect even more intimately with my audience.”

As a solo artist, Robbie Williams has sold 80 million albums worldwide, has six of the Top 100 best-selling albums in British history and has had 14 Number One singles. He is also one of the most in-demand live performers in music and continues to play stadiums around the world. He has won a record 18 BRIT Awards – more than any other artist in music history.

Robbie Williams says: “I can’t wait to play another Radio 2 In Concert – my first in 3 years. I’ll be performing some brand new songs from my new album The Christmas Present with the audience on Radio 2, as well as singing some of my biggest hits. See you in November!”

Also making her Radio 2 In Concert debut this year is singer-songwriter Dido, who is behind two of the best-selling albums in British chart history – No Angel and Life for Rent, with No Angel remaining the top-selling debut by a British female artist worldwide. She has won three BRIT Awards, three Ivor Novello Awards and a Billboard Award.

Dido says: “2019 has been a really special year for me. Releasing the album, going on tour for the first time in 15 years and enjoying it more than ever. I’m loving travelling the world and doing shows and I can’t imagine a better way to top off this year than by coming home and doing this show at the iconic Maida Vale Studios for Radio 2 In Concert.”

If you’d like to apply for tickets, which are free and will be selected randomly, you can do so here until Wednesday 23 October.

We've booked another stellar lineup for Radio 2 In Concert 2019!

Register your details now for a chance to be at one of these free intimate gigs 👉 https://t.co/PlYHGPxUx7 pic.twitter.com/GtJ96CUFE8