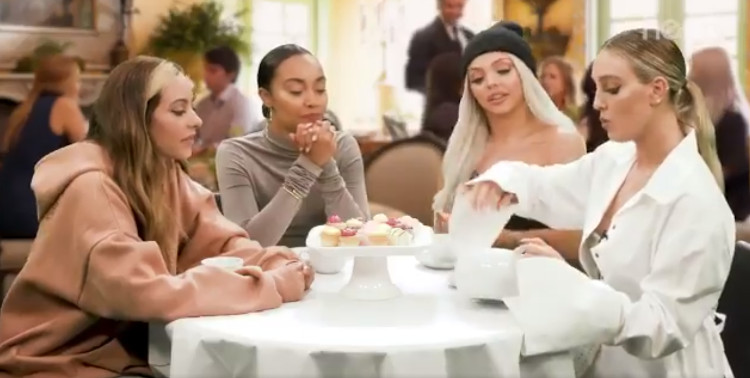 With radio being more than just what’s on-air these days, Heart has started a new online video series called Spill the Tea, with Little Mix admitting to some interesting stories.

Jesy revealed she’s the person most likely to send an embarrassing drunk text after she once text Ariana Grande.

She said: “I sent one to Ariana when I was drunk. It was in that group chat, don’t you remember? It was just letters, I was just sending letters.”

Jade asked if Ariana replied, to which Jesy answered: “She did she just put loads of laughing faces.”

It’s not only Jesy who does things she probably shouldn’t when a little tipsy as Jade then admitted that she tried to ring Taylor Swift when she was drunk. Jade said: “needless to say she didn’t get back to me on that one.”

Perhaps a bit embarrassing, but as they’re all being honest, Leigh-Anne admitted to asking a bouncer to google her to try and get into a club, she said: “At a club, I didn’t have my ID, they wouldn’t let me in and I said – I had to say it I said ‘please just Google me’. I had to say it coz it was annoying me.”

Leigh-Anne also admits to falling asleep whilst watching Beyonce at Coachella. She says: “I don’t even want to talk about it though because I feel embarrassed with myself.”

You can see the full Spill the Tea video below:

Drunk texting @ArianaGrande, sending nudes, going on Love Island… nothing is off limits with @LittleMix ? pic.twitter.com/ZmLWL51bWP