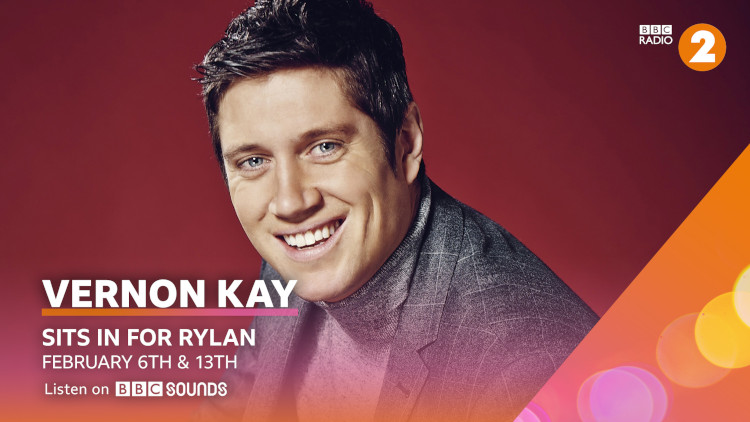 Vernon Kay is to debut on BBC Radio 2 later this month when he sits in for Rylan for two weeks.

His love of music led Vernon to join Radio 1 in 2006 presenting his weekend show until he left the station in 2012. He then fronted his own mid-morning show on the re-launched Radio X from 2015 until 2017.

Vernon has hosted many high profile entertainment TV shows including All Star Family Fortunes and Splash! for ITV1, Just the Two of Us (alongside his wife, Tess Daly) and The World’s Greatest Elvis for BBC1.

Last November he took part in ITV 1’s I’m A Celebrity in Wales where he reached the final and finished by taking third place.

Recently Vernon’s passion for sport has been transferred to screen having co-presented the live NFL coverage for Sky Sports, currently presenting both the Golf Sixes event, The Hero Challenge Golf Series and hosting The Blueroom at England Rugby home games.

When he takes over Rylan’s show on Saturday 6 and 13 February (3-6pm) there will still be the usual features – Couch Potatoes, the quiz where a listener is quizzed on TV and film, Fan Club Party and celebrity guests calling in. Plus, listeners will hear some of Vernon’s favourite records in Desert Vernon Discs.

Vernon says: “Really pleased to be filling in for Rylan with my Radio 2 debut! What better show to be on than a fun, high energy, Saturday afternoon slot. The show & Rylan are friends of the nation and I am delighted to have the opportunity to join in.”

"Really pleased to be filling in for @rylan with my Radio 2 debut! What better show to be on than a fun, high energy, Saturday afternoon slot!" – @vernonkay

Vernon joins the Radio 2 party in February and we can't wait ?

Set your reminders and listen live on @bbcsounds. pic.twitter.com/0CFHSMKqXh