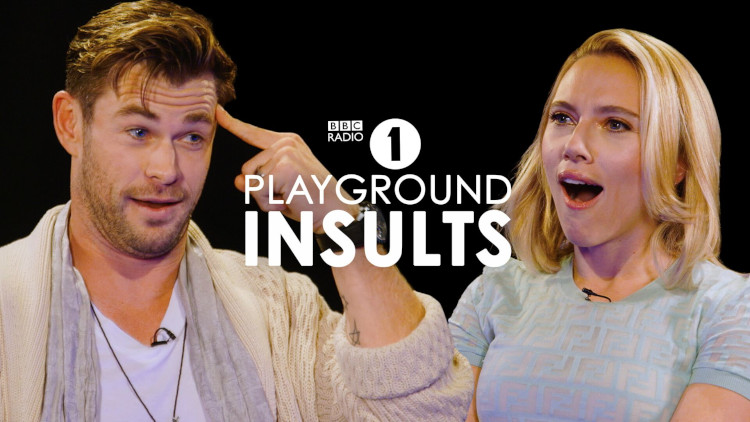 Ahead of the Avengers: Endgame, Chris Hemsworth and Scarlett Johansson featured in the latest edition of Playground Insults on Scott Mills’ BBC Radio 1 Show.

During the game, Scarlett Johansson and Chris Hemsworth took it in turns to throw insults at each other and it gets quite personal.

Chris asked Scarlett what is Black Widow’s superpower – “Is it owning a couple of tasers or are they like tridents from the Ninja Turtles?”

Scarlett asks Chris how Thor’s hammer grew bigger and jokingly says she loved it when they bleached Chris’s eyebrows to match his hair.

She said, “Chris spends more time in the hair and makeup chair than all of us…what are you doing in there? Getting a full face lift? Why does it take you so long? I’m waiting on the set with everyone else like where the hell is Chris Hemsworth?

“You’ve got a growing collection of grandma cardigans and I have been meaning to talk to you about it…like its cray. It’s like basically you are a walking Ann Taylor ad.”

Chris hit back saying, “It’s lucky you are beautiful because there’s nothing up here (pointing to his head).”

Scarlett replied, “That’s mean, did you just call me dumb? You went straight to dumb….like one minute I was like you are wearing my grandma’s sweater and then you’re like you are dumb!”

The insults continued with Chris questioning if Scarlett knows how to spell her name and she told Chris that his biceps look like Thanksgiving turkeys!

At the end of the game Scarlett admitted, “We are two kind people who only talk s**t behind each other’s backs.”

The banter was all in good fun though, and you can see the full video from Radio 1’s YouTube channel below: